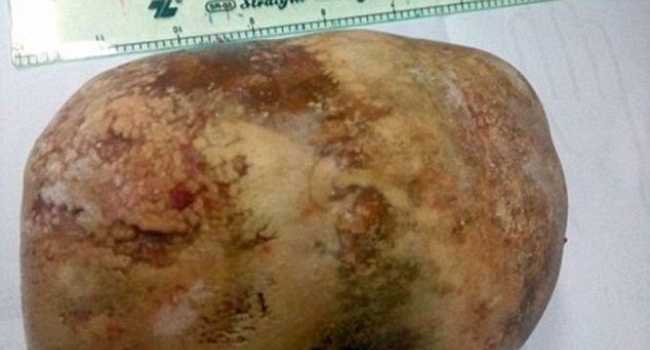 Doctors treating a man for abdominal pain were astounded to find a six-inch stone inside his bladder.

The 51-year-old, from Vietnam, had sought medical help after he became unable to urinate properly.

He had in fact been suffering in agony for 10 years - but admitted he had been too scared to go to hospital.

When he eventually arrived, the huge stone - measuring 6 inches (15cm) and weighing 3.3lb (1.5kg) was discovered.

This was diagnosed as a bladder stone -  a hard lump of minerals that can form inside the bladder when it's not completely emptied of urine.

The patient, known only as N.V.B, had surgery in city of Can Tho in southern Vietnam's Mekong Delta Region.

A common reason for this in men is having an enlarged prostate gland that blocks the flow of urine.

If urine sits in the bladder for a long time, chemicals in the urine form crystals, which harden into bladder stones.

But it is rare for one of such a size to be found, CEN reports.

However timing may well have been the reason, with the patient reportedly telling medics he had been suffering from the pain for a decade.

Dr Le Phuoc Loc, from the surgical urology department, said the patient was now recovering in hospital after a successful operation.

Bladder stones may not cause any symptoms if they're small enough to be passed out of the bladder during urination.

However, most people with them do experience symptoms because the stones either irritate the wall of the bladder or block the flow of urine.

Most cases of bladder stones affect men aged 50 or older, because of the link with prostate enlargement.

* lower abdominal pain, which can often be severe (men may also have pain in or around their penis)

* pain or difficulty when peeing

* blood in the urine