One in seven toddlers has tooth decay 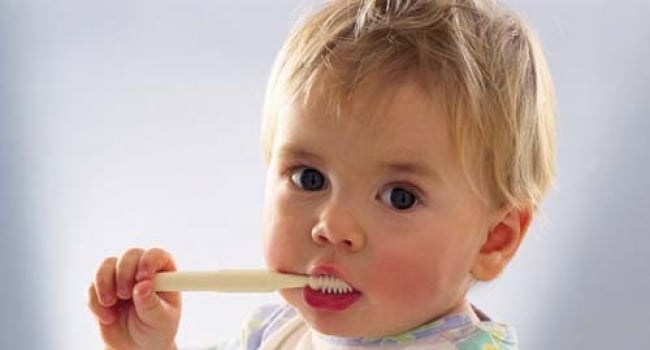 One in seven toddlers has tooth decay, new research reveals.

Some 14 per cent of three-year-olds have a decayed, missing or filled tooth, a study found.

Experts worry parents do not appreciate the importance of brushing their children's teeth as they juggle the responsibility of raising a family.

'We are having some children at five, six or seven who are having five, six, seven, eight, nine teeth removed in one go.'

Fizzy water is damaging our teeth as its acidity wears down enamel, an expert warned last month.

Sparkling water is more acidic than the plain version of the beverage, which is made worse by its common inclusion of additives, according to Dr Edmond Hewlett from the UCLA School of Dentistry.

Drinking fizzy water causes a chemical reaction that produces carbonic acid and gives the drink its distinctive 'crisp' taste, however, that same substance may also seriously damage our dental health.

Fizzy water-drinkers should be particularly careful not to swish it around their mouths when drinking.

Yet, those with a high saliva flow may be able to get away with drinking the beverage more often.

The researchers analysed 1,400 parents. Of which, 75 per cent brushed their children's teeth the recommended twice a day.

Yet, due to the 25 per cent who fail to ensure their youngsters' dental hygiene, 14 per cent of three-year-olds have a decayed, missing or filled tooth.

Ms Morgan said: 'People don't realise that you should start that early.

'No book can prepare you for life when you have a baby.

'When that lands on your plate - with all the different things you have to do and fit in - brushing teeth might not be the highest priority in the day.

'Sometimes it can get left. The messages might not be getting to everybody.

She said: 'We are having some children at five, six or seven who are having five, six, seven, eight, nine teeth removed in one go.

'There are some children who are having teeth extracted under general anaesthetic, that's approximately 8,000 children a year.

It shouldn't be that great a number.'

Mother Leah Ennis, 29, from Bridgend, south Wales said she had no instructions on how to keep her children's teeth healthy when she had her first child.

She said: 'Growing up I was shown good dental hygiene that I can pass onto my children but not everyone is.

'Pregnant women could be given this information through pregnancy.

'I didn't see anything up on the wall in hospital waiting rooms - that would be a good place to start. I had no information from midwives.

'If parents aren't told they're not going to go and look for the information.'