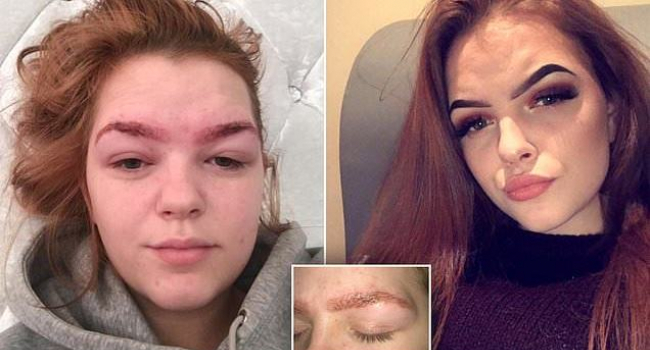 A student is warning others about the dangers of at-home eyebrow tinting kits after using one left her needing hospital treatment for burns.

Montanna Eastwood, 19, used a kit she bought in a high-street shop in the hope that it would make her brows darker.

After leaving the dye on for just five minutes, Ms Eastwood, of Bideford, Devon, was initially happy with the result when she took the dye off.

But just two hours later a rash appeared on her eyebrows, which was soon burning and weeping as the hours went on.

She went to hospital in agony three days after dying them when a cream her GP gave her failed to relieve her symptoms.

Miss Eastwood was administered steroid tablets and anti-histamines to encourage the burning to go down, but she is still in recovery.

Miss Eastwood, who studies hairdressing, said: 'I decided to dye my eyebrows at home because I just wanted them a little darker so I didn't have to wear as much make-up to fill them in.

'It was a kit that I hadn't used before, but as I only left it on for five minutes I was mortified that it had done so much damage.

'A few hours after I removed the dye, I noticed that there was a rash and it was itchy.'

Miss Eastwood added: 'But then as the evening went on it started getting sore and started weeping with liquid.

'It was getting unbearable by Monday so I went to doctors where they gave me some cream.

'But by the next day I was in agony and could barely open my eyes so had to go to the hospital.

'They gave me steroid tablets and anti-histamines - the professionals have been very helpful at getting me on the road to recovery.'

It is thought that Miss Eastwood had an allergic reaction to the dye.

Colouring products contain a variety of chemicals but phenylenediamine (PPD), commonly found in darker shade products, is the prime cause of allergic reaction to hair dye.

Skin reactions to hair dye vary from mild to severe symptoms. But in severe reactions, it can cause a person to feel ill and have anaphylactic shock.

Despite having never used the tint before, Miss Eastwood claims that she stuck to the instructions precisely.

However, Miss Eastwood didn't use a patch test as she thought dying her hair regularly would mean she was safe.

She said: 'I only left it on for five minutes, and took it off in the way I was instructed to.

'I didn't do a patch test as I always dye my hair, so assumed this would be fine too.

'I was very lucky that I didn't lose any hair as a result of the dye - but the skin underneath and surrounding my brow is completely burned.

'I want people to learn from what has happened to me as I wouldn't want anyone to go through something this painful.'

Miss Eastwood added: 'I would warn everyone to do a patch test of the dye even when you're doing it yourself.

'I have dyed my hair so many times and my body has never had this sort of a reaction - but it just shows that your body is constantly changing.

'A patch test doesn't take long at all and can save you from a lot of pain and aggravation!'

Miss Eastwood said she cannot remember the brand of the kit.