Woman, 54, develops eczema on her hands and feet after suffering an allergic reaction to the nickel inside her dentures 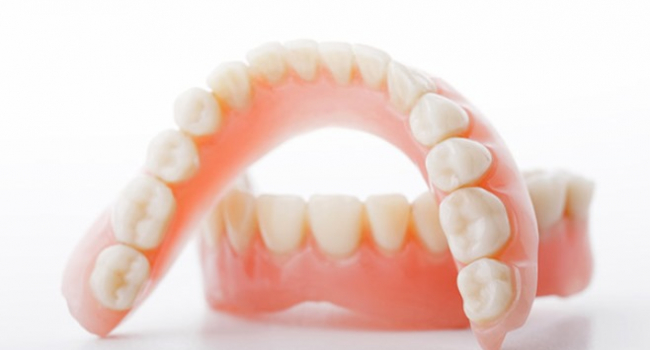 A 54-year-old developed eczema on her hands and feet because of an allergic reaction to her nickel dentures.

The unnamed woman's symptoms resolved when dentists replaced her implants with ones made of titanium, which she is not allergic to.

The woman, who had previously reacted to metallic jewellery, also had bleeding gums, as well as red patches of skin.

A dermatologist initially prescribed her an ointment, however, when this failed to relieve her symptoms she visited a metal allergy expert.

It was this specialist who made the connection between her red, itchy skin and her dental work.

The woman underwent an allergy-patch test at Tokushima University, Japan, which revealed she cannot tolerate nickel.

Metal is often used in dental work due to it being able to withstand acidic foods, however, it does break down over time.

Small fragments can then enter the bloodstream and get absorbed into tissue elsewhere.

The woman first developed a rash on her feet when she was 45, which spread to her hands by the time she was 51.

When she arrived at Tokushima University after ointments failed to help, a dental examination revealed she was missing several teeth.

The woman underwent a skin-patch test for dental materials in the department for general allergens. Dr Yoshizo Matsuka led her therapy.

The results, published in the journal Clinical Case Reports, came back as extremely positive for nickel.

Nickel's presence in the woman's denture implants was confirmed by extracting some of their 'dust' to determine their metallic make-up.

Once the nickel denture implants were removed and replaced, her symptoms improved initially.

However, she reported a relapse four months later.

An additional patch test was carried out, which confirmed she is not allergic to titanium.

The patient's condition improved without treatment, leading the report's authors to believe she may have come into contact with another unknown allergen.

On the back of the case report, the authors recommend dentists screen patients for allergens before starting treatment, particularly those with history of reactions to cosmetics or jewellery.

Nickel allergy is a common cause of allergic contact dermatitis, according to the Mayo Clinic.