Baby boy, 3, recovers from stroke which he suffered in February 2018 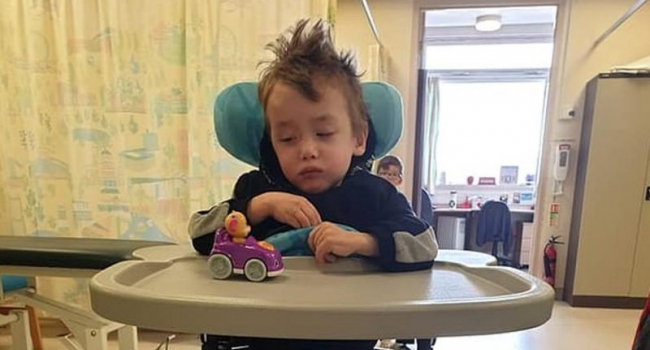 Ronnie Kerman was only one and a half years old when he suffered a stroke. Now, after 16 months, the boy stood up for the first time.

On that day, almost a year and a half ago, his father found him in a helpless state in bed. He was immediately taken to the hospital, where he spent the next 16 months. Doctors discovered tumors and cysts in his brain caused by a genetic disorder that triggered a stroke by limiting blood flow to the brain. The child had to go through a series of surgeries and through chemotherapy.

Because of the stroke, little Ronnie lost much of his vision and lost his ability to control his legs. However, the growing body responded very well to intensive treatment, and not so long ago, the boy rose to his feet for the first time.

According to doctors, Ronnie has a hereditary neurofibromatosis, which he inherited from his father, who has a very moderate form of the disease. Neurofibromatosis leads to the formation of nerve tumors on the body, but in Ronnie they grew in the brain.

Neurofibromatosis is the name for a whole group of disorders that cause the appearance of growths and neoplasms. It appears as a result of a mutation in one of the genes, but almost half of the victims of neurofibromatosis do not have a family history of the disease, and the mutation occurs spontaneously. It is impossible to stop pathological neoplasms, although laser and traditional surgery allows you to get rid of growths.