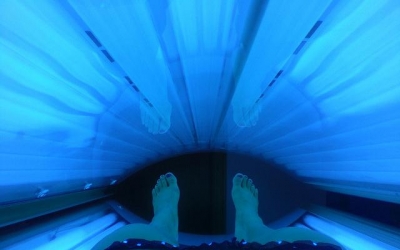 Train your brain for long enough, and you could find yourself addicted to just about anything. Tanning, it turns out, may need hardly any effort at all, as ultraviolet rays (UV) naturally produce the same feel-good hormones in your brain, endorphins, as those that make heroin addicts crave hard drugs, Medical Daily reports.

A new study from Massachusetts General Hospital and Harvard Medical School finds that UV rays compel people to bronze their bodies in the warm glow of the sun with the same gratifying tendencies as food addicts who can’t stay away from dessert and drug addicts always looking for the next fix. The findings suggest that avoiding skin cancer, indeed the most common type of cancer, demands not only concern for dangerous behavior, but active measures to stop it.

"This information might serve as a valuable means of educating people to curb excessive sun exposure in order to limit skin cancer risk as well as accelerated skin aging that occurs with repeated sun exposure," said David Fisher, the study’s senior author, in a statement. According to the Centers for Disease Control and Prevention, skin cancer consistently ranks as the most common form of cancer in the U.S. In 2010, over 61,000 people were diagnosed with melanomas of the skin. Just under 10,000 people died from melanomas.

To carry out their study, Fisher and his colleagues exposed shaved mice to UV light for six weeks. Within one week, endorphin levels in the bloodstream increased. After the six-week trial, the mice were given an opioid-blocking drug, after the team’s speculation that the same receptors responsible for blocking pain with morphine and painkillers were involved in feelings of mild euphoria from UV rays. Sure enough, the mice that received the drug displayed withdrawal symptoms such as tremors, chattering, and shaking, and avoided locations where they received the drug.

Fisher speculates the addictive power of UV rays could explain why people feel compelled to leave themselves so exposed (literally) to cancer, despite knowing full well the behavior is dangerous. The desire to do, he explains, is nearly instinctive. "It's surprising that we're genetically programmed to become addicted to something as dangerous as UV radiation,” he said, highlighting that UV rays are “probably the most common carcinogen in the world.”

Dermatologists frequently warn people about the dangers of prolonged exposure to UV rays. Despite positive perceptions that sunlight is rich in vitamin D, Fisher cautions there are far safer ways for a person to receive the recommended dosage, namely through food or multivitamins, without subjecting oneself to addictive and inherently dangerous effect of UV rays. But perhaps the greatest contribution the study makes, Fisher says, is in educating younger generations about the risks of constant tanning.

"Our findings suggest that the decision to protect our skin or the skin of our children may require more of a conscious effort rather than a passive preference." This means that not only should parents tell their children “Don’t forget to put on sunscreen,” they also have an active duty to see that the sunscreen gets applied. The short-term risk of missing one day of sunscreen could actually be putting the child at risk, neurologically, to decide against wearing sunscreen on future occasions. And because young brains are notoriously plastic, the behavior may become permanent. By then, the damage may already have been done.