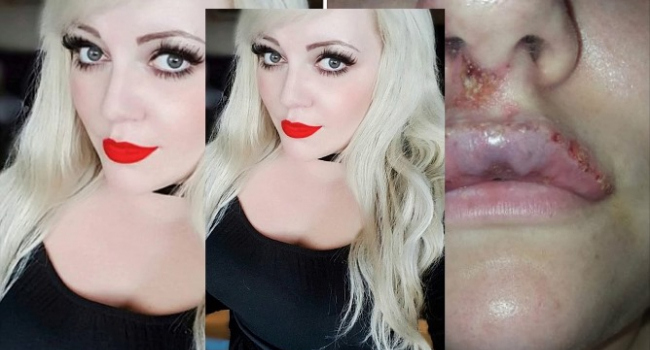 The desire to enlarge the lips turned out for a 25-year-old Saysha Williams to be a real nightmare, The Sun reported.

According to the woman, she is a fan of Kylie Jenner, who is known to have adjusted the shape of her lips with the help of fillers.

Three years ago, Saysha finally decided on a cosmetic procedure. She paid £ 200 for fillers, and she turned to a specialist she didn’t know, who was ashamed to ask for a certificate of qualification. During the procedure, Saysha Williams’ upper lip turned blue, and by the morning white spots appeared on his face. Frightened girl turned again to the beautician, but she said that all this is a consequence of herpes.

Meanwhile, the internal part of the oral cavity was covered with ulcers, the spots on the face reddened and inflamed. Doctors found out that she developed an infectious disease of impetigo due to a violation of aseptic rules by a cosmetologist. As a result, Saysha for the next five days was practically unable to eat because of painful mouth ulcers.

Three years have passed since then, but she still has pain in her lips. In addition, white spots continue to appear periodically on her face.

Saysha hopes that her story will help people to be more responsible to the choice of a cosmetologist.