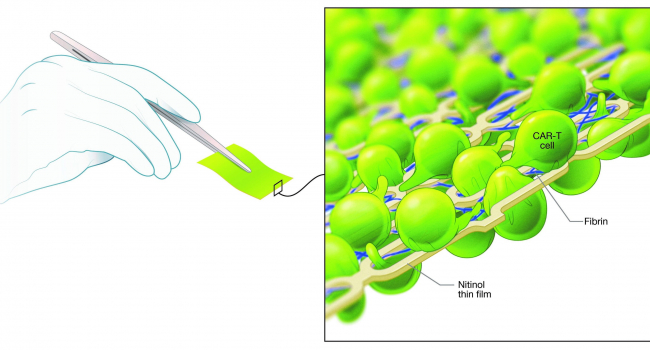 The metal used today to repair broken bones, to straighten the dentition, and can also help prevent the spread of solid cancers, the journal Nature Biomedical Engineering reported referring to a study.

Scientists from the Fred Hutchinson Cancer Research Center for the first time showed that a small and thin metal mesh, populated by immune cells that fight cancer, significantly reduces cancer. This has been shown in preclinical models of ovarian cancer.

According to Medical Express, the mesh destroyed cancerous tumors in 70% of cases.

Hard tumors, including breast, ovarian and pancreatic cancers, are known to be able to withstand immune therapy using CAR-T cells. If these cells are simply injected into the tumor, the efficiency will be low. A grid with cells solves this problem.

For the manufacture of the mesh, scientists used a film 10 microns thick, obtained from a nickel-titanium alloy and suitable for implantation. The recesses in the film, creating a mesh structure, can be changed depending on the template. They 'pumped' drugs or immune cells, after which the film is implanted.

The cells begin to be released into the medium from the implant. As part of the test, scientists used cells that were programmed to search for an ovarian cancer cell marker, ROR1. This made it possible to selectively attract immune cells to the tumor. A stable result was obtained in 20 days - getting rid of cancer in 70% of laboratory animals.