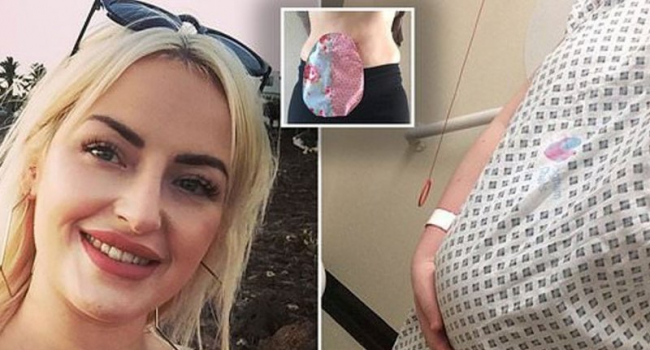 The bladder of Pollyanna Love, 23, from the Derbyshire almost burst five years ago: doctors pumped three liters of urine out of it - this is six times more than what the bladder can contain relatively comfortably, Daily Mail reported.

When Pollyanna was in the hospital with vomiting, her belly looked like the belly of a pregnant woman who was about to give birth. The young woman could not even remember the last time she normally visited the toilet.

It later became clear that Pollyanna had a rare Fowler's syndrome, because of which the muscles in the urethra did not relax and did not pass urine. Doctors gave her a catheter to drain her bladder, before she had a stoma bag fitted to collect her urine.

But later, the doctors had to remove the bladder and put in a special bag - the stoma, which must be worn on the stomach and into which urine flows instead of the bladder.

Fowler's syndrome is a pathology associated with the inability to urinate. It is linked to an abnormality of the urethral sphincter - the muscle that holds the urine. Fowler's syndrome cannot be cured, and patients require a catheter.