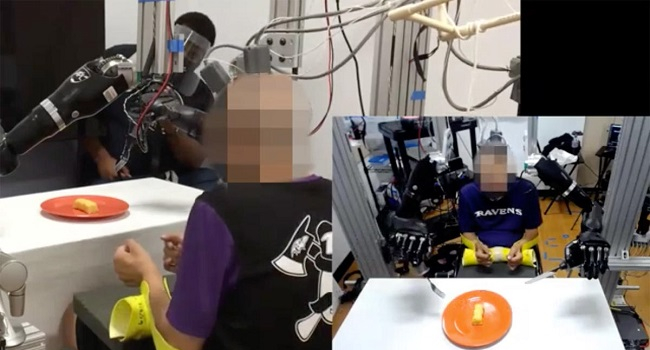 Thanks to a new development by scientists, in less than 90 seconds, a man with very limited mobility of the upper body, who has not been able to use his fingers for about 30 years, fed himself dessert using his mind and robotic hands, Medical Xpress reported.

A team led by researchers from the Johns Hopkins Applied Physics Laboratory in Laurel, Maryland, and the Department of Physical Medicine and Rehabilitation at the Johns Hopkins School of Medicine published a paper in the journal Frontiers in Neurorobotics that described this latest feat using a brain-computer interface (BMI) and a pair of modular prosthetic limbs.

This system provides a direct connection between the brain and a computer that decodes neural signals and translates them to perform various external functions, from moving the cursor on the screen to self-eating. In this particular experiment, muscle movement signals from the brain helped control robotic prostheses.

One of the most important advances in robotics demonstrated in the paper is the combination of robotic autonomy with limited human involvement, where the machine does most of the work, allowing the user to customize the robot's behavior to their liking.