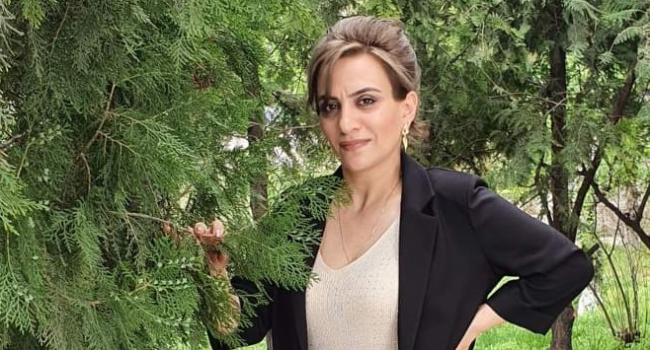 On April 27, 38-year-old Hasmik Muradyan had a seemingly simple surgery to remove polyps from her maxillary sinuses. The doctors said that she would stay in the hospital for a day at the most. But Asmik didn't return home the next day, or any day thereafter.

Her 11-year-old daughter recalls that on the day she left for surgery, her mother told her and her brother, "Behave yourselves, I'll be back tomorrow!" Over the next couple of weeks, the girl wrote her mother dozens of messages: "Mom, why aren't you answering?", "Mom, where did you disappear to, why aren't you coming back?", "Mom, you said you were only going away for one day!" The girl received no reply to all of these messages.

The relatives told the girl that her mother was just not feeling well after the surgery and therefore could not respond. No, they did not lie to her, they wanted to believe that she would recover. Although they admit they knew in their hearts she was gone.

Only 18 days after the operation, when Hasmik's death was finally confirmed, her husband hugged his daughter and her 15-year-old brother and told them Mom was gone.

The children still can't seem to come to terms with that thought. Even the adults can hardly believe what happened.

For some time now Hasmik was bothered by headaches. The headaches were caused by polyps in her maxillary sinuses, so one day she decided to get rid of them. She applied to Heratsi hospital complex where she had to undergo surgery by Dr. Anna Poghosyan, the head of maxillofacial surgery department, within the framework of "100 years with people" program.

Mrs. Anahit, Hasmik's aunt, told NEWS.am that her niece had brought a CD with the data of the CT investigation done last year to the doctor and then she went through the investigation all over again and did a number of tests prescribed by the doctor.

The surgery was scheduled for the day after the initial appointment, in the early morning hours. The relatives asked if it was worth the rush, but Hasmik said that it was a trifle surgery, so what was the point of putting it off and complicating things.

The operation did not go according to plan

When the operation was over, Hasmik's relatives were told that everything went well, there was just some bleeding which they were trying to stop and they would soon take her down to her room. Mrs. Anahit found out about it over the phone and decided to come to take care of her niece when she regained consciousness. She drove to Yerevan from Ararat and arrived at 4 p. m. The patient's room was not in Anahit's room. The niece was not in her room and the relatives were panic-stricken; so much time had passed without bringing Hasmik back. None of the doctors or residents explained anything to them, they were told not to bother with any questions.

Hasmik's mother recalls that on her questions the doctor sarcastically said: "Is this the first operation in your family? What are you so worried about?"

"Resident Ani told me that my daughter was out of anesthesia, just wanting to sleep. But we found out later that she never came out of the anesthesia..."

When Hasmik sisters went to doctor Anna Poghosyan's office, she said that Hasmik had had a stroke: one of the polyps was on the vessel feeding brain and its removal caused blood vessel damage and hemorrhage in brain. It was said that this vessel in Hasmik was located differently than most people, and that it only happens in 1 person in a million.

"She told us that it was not yet known what the consequences of this stroke would be - maybe her arm or leg would become weak or she would go blind. We remember now that she, the doctor, was kind of confused then, her voice trembling. My sister cried and asked the doctor to swear by her children that our Hasmik was alive, but she did not swear. Then another doctor, her colleague, said our sister was alive, they had just put her in an artificial coma for two days so the repaired vessel wouldn't get damaged again," recalls Kristine, Hasmik's sister.

Looking back now, Mrs. Anahit admits that even then she felt that her niece had died on the operating table. But she and all the woman's other relatives wanted to believe that she could be saved.

The whole 18 days the relatives were coming to the intensive care ward, where Hasmik was kept on life support, talking to her, saying something...

The doctors, according to relatives, most likely, did not believe that it was still possible to save Hasmik, they just fed the relatives with false hopes. The doctors on duty at the intensive care unit tried to hint to Anahit that since she is a nurse and knows better what's what, perhaps she should convey to the other relatives that Asmik's condition is "extremely serious."

On the 18th day, Ms. Anahit walked into the ward and found a commotion. Two doctors were giving Hasmik a heart massage, trying to resuscitate her. Anahit rushed to help them herself. But after a while they had to certify her death.

In those 18 days Hasmik had changed beyond recognition. When her relatives went to collect her body from the morgue, they literally could not recognize her, they were sure that it was the body of another, unknown woman. Eventually, Mrs. Anahit recognized her niece by her fingernails, but her face was really unrecognizable.

The morgue worker said that this change was to be expected, because "this girl had really been dead for at least ten days.

Who is to blame?

According to the relatives, the surgeon may have made a mistake during the operation. Serious error, according to Anahit, was the failure to perform a CT scan with contrast material before the operation to see the location of blood vessels and assess all possible risks. The relatives also do not exclude the possibility that the resident could have performed the operation and made a fatal mistake for Hasmik.

"We were not in the operating room, and we don't know what exactly happened there," Mrs. Anahit said.

The case is currently under investigation, and the Geratsi hospital complex noted that it will put everything in its place: if the investigation proves that there are those responsible, they will be called to account.

Hasmik's relatives hope the truth will prevail. They also hope that nothing will be falsified in the documents and the results of the expertise, and they will finally know the truth about what really happened to their relative.

But at the moment the relatives are embarrassed by the fact that Anna Poghosyan put their numbers in the black list and refuses to have any contact with them or explain anything.

Recently, her daughter Hasmik asked her grandmother if she could give her the number of the doctor who operated on her mother.

"Why would you, child?" Mrs. Anahit asked.

"I want to ask her where my mother is," said the girl.