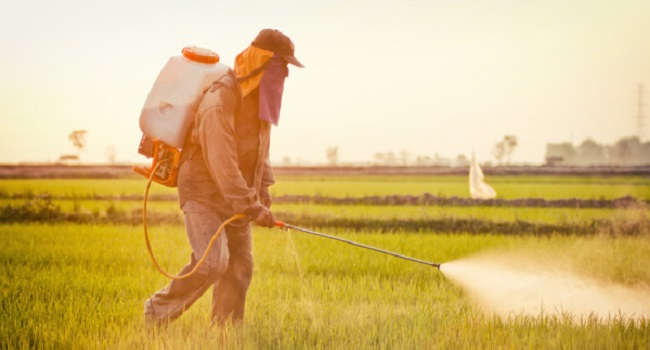 An unborn child exposed to pesticides often used on citrus and apple trees is 87 percent more likely to develop a rare type of eye cancer, according to a study.

Researchers at the University of California, Los Angeles, compared levels of nearly five dozen chemicals used in agriculture near the homes of 335 children under the age of five who developed retinoblastoma with healthy children from the same state.

Scientists who conducted the study warned that pesticides are especially dangerous to children because their organs are still forming.

Retinoblastoma, a type of eye cancer, can affect one or both eyes and begins when cells begin to grow uncontrollably because of a genetic mutation, the American Cancer Association reported.

Symptoms of the disease, most common in children under the age of three, include a white or pink pupil or early signs of vision problems.

Patients are offered radiation or laser therapy to kill the cancer cells, and in some cases chemotherapy.

But this can lead to blindness and increase the risk of getting cancer again later in life.

Researchers analyzed California's cancer registry, then collected reports on pesticide use that indicated which pesticides were used in children's homes in the months before they were born.

The results showed that children with cancer were more likely to have been exposed to four specific pesticides compared to healthy children.

Those who were exposed to bromacil - commonly used to treat citrus plants as well as to kill weeds - were 87 percent more likely to develop unilateral retinoblastoma, or eye-only cancer.

Acephate - also used on citrus plants - increased the risk of developing this type by 70%.