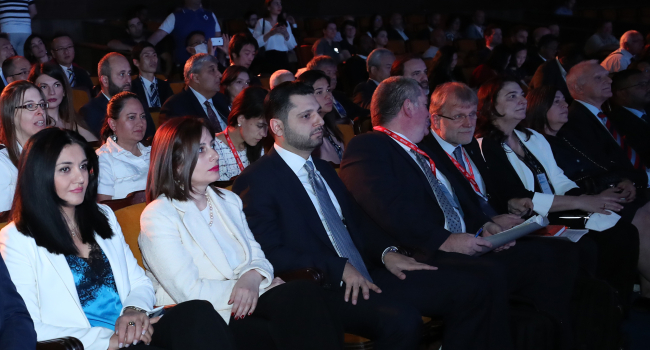 From the beginning of 2022, a Medical Rapid Response Team has been established in Armenia, which is currently undergoing trainings and certification procedure at the WHO, Lena Nanushyan, Armenian Deputy Minister of Health, told journalists during the 5th Global Meeting of Emergency Medical Teams.

She informed that the team was created on the basis of St. Grigor Lusavorich Medical Center and apart from doctors it also includes specialists of the Ministry of Emergency Situations, as it not only provides medical aid during emergencies but also solves logistical issues relating to transportation, temporary shelters, water supply, electricity, etc.  Our team will be able to help in emergencies not only in Armenia, but also in neighboring countries once they receive the international certificate.

The Deputy Minister said that such teams from France, Italy and Lithuania have greatly helped Armenia during the coronavirus pandemic, helping not only with treatment of patients, but also with organizational issues, collection of statistics and so on. At the same time, in fact, and then during the 44-day war and further military escalations in Armenia, such teams were unofficially formed to help medical institutions in the attacked regions.

Now this issue is being resolved at the official level, the team is studying the experience of other countries and standards in order to introduce them in Armenia, and this is important not only in terms of the development of this team, but also for the implementation of further plans - the creation of such teams in other hospitals in Armenia.