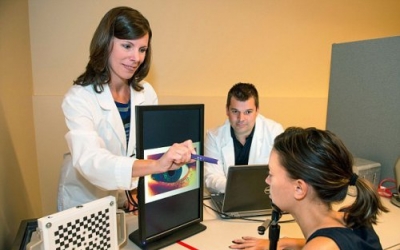 A penlight pupil test commonly used by doctors can predict a diagnosis of autism spectrum disorder, a Washington State University study finds. The new research suggests this simple exam could be an accurate physiological measurement of autism, the range of neurodevelopmental disorders characterized by difficulties with social interaction and repetitive patterns of behavior.

Parents and doctors begin to worry about autism whenever a child does not meet the usual developmental milestones. However, to make that diagnosis, specially trained physicians and psychologists must conduct a behavioral evaluation, since no medical test for the disorder currently exists. According to Autism Speaks, these assessments cannot be confirmed until a child reaches age 2 or 3, when, it is said, a child’s symptoms become stable. Meanwhile, precious time is lost, time when a child might be receiving special training and therapy that could spell the difference between severe disability and high-functioning ability.

Yet, the very latest brain imaging technology has revealed some clear distinctions in the autism spectrum disorder brain. Since some obvious anatomical differences exist, why isn't there a physiological test to diagnose autism — one that is able to detect the disorder at an early age?

Lead investigator Georgina Lynch, an assistant clinical professor of speech-language pathology, and her colleagues worked with 24 children and teens between the ages of 10 and 17. Half of these participants were typically developing, and half had autism (high-functioning). For four trials, the researchers measured the participants' pupil reflexes in response to four seconds of light in each eye.

In 70 percent of the trials, the pupils of kids with autism took markedly longer to constrict.

The researchers say their findings bolster a growing body of evidence showing that the pupils of children with autism constrict more slowly to flashes of light. Lynch and her colleagues chose a pupil dilation reflex test because it can identify increased cerebrospinal fluid pressure, which brain scans have revealed to be symptomatic of autism. Taking their experiment one step further, Lynch and her colleagues also measured cranial nerves and ocular motility for evidence of neural misfiring occurring in the brainstem.

Such an abnormality would help explain why children with autism find it difficult to make eye contact and are highly sensitive to bright lights, Lynch explained. Once validated by larger studies, this pupil reflex test could be routinely performed early in every child’s life to screen for autism.