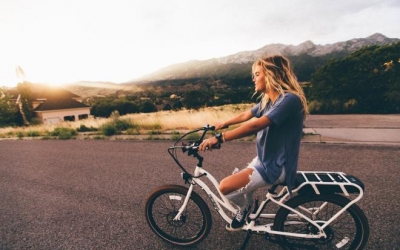 Exercise may be key to improving the brain’s neural connections. A pair of Italian researchers from the University of Pisa studied the connection between the body and mind in hope of answering the question: Can physical activity improve learning, memory, and brain repair? Their answer, published in the journal Current Biology, reveals how exercise can cause new neural pathways to manifest in the brain, and possibly even help people overcome certain conditions like lazy eye.

Researchers were inspired by previous studies that showed rats were able to improve connections in their brains’ visual cortexes by being physically active. This in turn improved their eyesight when compared to sedentary animals. They decided to see if the same was true for humans by testing a group of 20 adults. For the first test, one of each participant’s eyes with a patch as they sat in a chair and watched a two-hour-long movie. Then, still wearing the patch, participants exercised on a stationary bike for 10 minute intervals while they watched the same movie.

Generally, when a person wears an eye patch — even for a short period — their closed eye becomes stronger as their brain’s visual cortex compensates for the lack of visual input. The increased strength causes an imbalance in the eyes, which subsequently enables the researchers to measure the creation of new visual pathways in the brain, known as neuroplasticity. When paired with exercise, the researchers found there were higher levels of neuroplasticity in participants, which ultimately led to better vision in one eye.

"Moderate levels of physical activity enhance neuroplasticity in the visual cortex of adult humans," said the study’s co-author Claudia Lunghi, a researcher from the National Research Council's Neuroscience Institute at the University of Pisa, in a press release. "Our study suggests that physical activity, which is also beneficial for the general health of the patient, could be used to increase the efficiency of the treatment in adult patients. So, if you have a lazy eye, don't be lazy yourself!"

Lazy eye, also known as amblyopia, is a condition caused by ineffective communication between the optic nerve and the brain, according to the National Eye Institute. The eye looks normal but the brain favors the opposite eye. It’s the most common cause of visual impairment among children, affecting up to three of every 100 children. For those who don’t get treated during childhood, the condition persists into adulthood.

Up until the 1960s, researchers believed the brain was done developing at the end of childhood, thus leaving people stuck with a permanent physical structure into adulthood. Modern science has since demonstrated the brain has the ability to create new neural pathways throughout adulthood — including those in the visual cortex. Researchers believe exercise enhances neuroplasticity because it disables a neurotransmitter that blocks nerve signals, which allows the brain to send more messages and create new neural pathways.

This can be especially helpful for adults with amblyopia because for them the condition is oftentimes untreatable. "By showing that moderate levels of physical activity can boost the plastic potential of the adult visual cortex,” Lunghi said, “our results pave the way to the development of non-invasive therapeutic strategies in adult subjects."