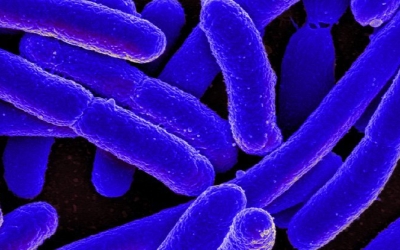 Bacterial resistance to antibiotics is a growing problem around the world, responsible for some 2 million infections in the US each year that lead to approximately 23,000 deaths.

But a new nanoparticle treatment developed by researchers at the University of Colorado Boulder could provide an effective means of fighting antibiotic-resistant bacteria including Salmonella, E. Coli, and Staphylococcus, based on results in a laboratory environment. In testing with a lab-grown culture, the nanoparticles killed 92 percent of drug-resistant bacterial cells while leaving the other cells intact.

The treatment consists of light-activated therapeutic nanoparticles called "'quantum dots". These extremely small particles, which resemble the semiconductors used in electronics, are about 20,000 times smaller than a human hair, and when excited by light they prove deadly to drug-resistant bacterial cells.

"By shrinking these semiconductors down to the nanoscale, we're able to create highly specific interactions within the cellular environment that only target the infection," said Prashant Nagpal, senior author of the study published in Nature Materials.

It's not the first time that nanoparticles have been used to combat bacteria. Previous research has shown that metal nanoparticles are effective against antibiotic-resistant infections, but at a cost: indiscriminate damage caused to surrounding cells in addition to the infection.

In contrast, the quantum dots can be tailored to particular infections owing to their photoexcited (activated by light) properties. The nanoparticles are inactive in darkness, but by exposing them to particular wavelengths of light, the researchers can effectively make the dots target infected cells.

According to the researchers, this specificity could help reduce or eliminate the side effects patients experience in treatments for infections, and could inform future development of anti-bacterial medicines.