Harmful levels of lead in paint at dozens of playgrounds 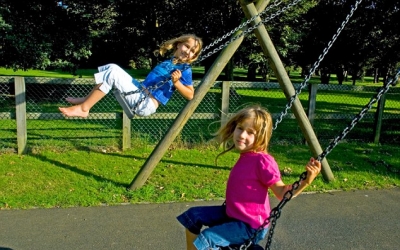 Climbing frames, swings, gates, see-saws, slides and roundabouts were among the facilities found to be contaminated.

Scientists from Plymouth University tested samples from 47 playgrounds, including some less than a decade old, across Devon, Cornwall, Somerset and Hampshire.

Analysing the composition of paint, they discovered lead content up to 40 times greater than recommended levels, along with higher than expected amounts of other harmful metals such as chromium and cadmium.

Dr Andrew Turner, who led the research, said: 'While undisturbed and intact, coatings and their chemical components are relatively safe.

'But once the film begins to deteriorate through abrasion or via exposure to UV light and moisture, the paint begins to crack, flake and chalk and metal-bearing particulates are mobilised into the environment.'

Lead is a highly toxic metal and ingesting it can cause serious health problems, especially among growing children.

Children exposed to moderate or high levels of lead can suffer irreparable damage to their brain, liver, kidneys and nervous system.