Surgeons recover baby’s skull with the help of 3D 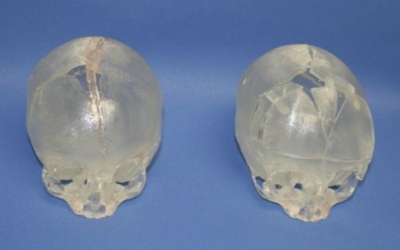 When Gabriel was born in August, his father, Manuel Dela Cruz, said everything seemed fine with his new son. It wasn’t until a week after his birth that Gabriel’s parents thought their son’s forehead looked abnormal.

“We noticed something was wrong with him,” Dela Cruz, told FoxNews.com.

Worried for their son’s health, the new parents took Gabriel to a pediatrician, who diagnosed the newborn with unilateral coronal synostosis – also known as anterior plagiocephaly.  For babies with this condition, a growth plate fuses prematurely on one side of the skull, causing the forehead to become more and more distorted and form asymmetrically.

Although the side effects of plagiocephaly are mostly cosmetic, the deformity can grow significantly worse if left untreated – leading many parents to opt for reconstructive surgery.  Knowing what needed to be done, Dela Cruz said it was frightening to have their son undergo an operation at such a young age.

In order to treat Gabriel, physicians at Stony Brook University decided to try a completely new kind of operation – one that would cut down on the time the infant spent in the operating room.

Through a collaboration with Medical Modeling Inc. in Golden, Colo., Dr. Michael Egnor and Dr. Elliot Duboys were able to virtually plan the entire surgery beforehand.  Additionally, the company created 3D printed before-and-after models of Gabriel’s skull for the surgeons, so they could accurately predict how the operation’s results would look.

“They sent us cutting templates, which were pieces of 3D modeling that we were able to place on the child’s skull during surgery,” Duboys, associate professor of surgery  at Stony Brook Medicine, told FoxNews.com. “And then we just traced where the cuts should be on the skull, almost like a stencil.”

Both Egnor and Duboys said the 3D modeling technology helped to cut down on the length of the procedure, which meant Gabriel spent far less time under anesthesia than during traditional surgery.  They hope more surgeons will utilize this 3D imaging and modeling to perform reconstructive surgeries in the future.

As for Gabriel, Dela Cruz said his son will still need to wear a helmet to reshape his forehead.  But overall, he responded extremely well to the surgery and his forehead is not as protruded as it once was.