Retinopathy of prematurity: what you should know about it 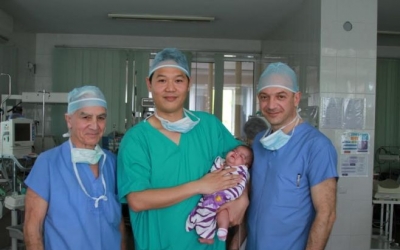 
Retinopathy of prematurity (ROP) is an eye disease that usually affects prematurely-born babies. ROP can be mild and resolve spontaneously, but in serious cases it can lead to blindness. NEWS.am Medicine’s reporter spoke to Dr. Sui Chien Wong (UK, Moorfields Eye Hospital and Royal Free London Hospital) who explained what retinopathy of prematurity is and how it can be treated. Dr. Sui Chien Wong visited Armenia to perform several operations on babies who suffer from ROP.

So when does this disease occur? Medics say ROP affects prematurely-born babies that have received intensive neonatal care with the use of oxygen therapy. During baby’s development, blood vessels grow from the central part of the retina outwards, and this process is usually completed before the normal time of delivery. In premature babies this process is usually incomplete, and because of disorganized growth of retinal blood vessels during intensive neonatal care, multiple band-like membranes may occur. They can pull up the retina, causing detachment of the retinam which can result in blindness.

“When the baby is born early, the blood vessels on the retina haven’t yet completely developed. So when they come out into the world, these blood vessels are not fully developed, and when they face varying environmental factors, they can become abnormal and develop such problems,” Dr. Sui Chien Wong explained.

If the baby is born on time and if his/her blood vessels grow normally, ROP does not occur.

“There is basically a loan of scar tissue on the surface of the retina, that is causing the retina to wrinkle, and it pulls off, just like wallpaper is pulled off the wall,” Dr. Sui Chien Wong said.

To prevent the problems caused by ROP, children suffering from this disease are sometimes operated on. During these operations, surgeons go inside the eye of the baby with tiny instruments (that are about 0.7 milimires) and slowly peel off the scar tissue. These operations are very difficult, and only about two dozens of doctors worldwide can do it.

In the frames of the program of “Center of Excellence for the Prevention of Childhood Blindness” (CEPCB), which is the joint project of AECP and USAID, Dr. Sui Chien Wong performed 4 of those operations in Armenia on April 28. He also taught and trained Armenian doctors that also took part in the operations.

He said that the most difficult operation lasted over 4 hours, and the easiest one lasted about an hour. These were the first 4 operations of this type that that have been done not only in Armenia, but in the whole region, too.

After several months we’ll find out if the operations were successful and if those babies will be able to see light. They say that with these operations, children suffering from ROP have a 50-50 chance to start seeing light, while without the operations, the chances are high that they will become blind.

“Success depends on how long they’ve had the problem, what the problem looks like, it depends on the nature of the decease and the pathology. So there are a lot of different factors,” Dr. Sui Chien Wong said.

AECP President Dr. Roger Ohanesian told NEWS.am Medicine’s reporter how he and Dr. Sui Chien Wong examined babies suffering from ROP. They discovered several really difficult patients, and some cases were already impossible to deal with, since those children had already lost their vision, so it was too late to do anything.

Every year, about 400-500 premature babies are born in Armenia, and about 30% of them suffer from ROP. So about 150 babies are diagnosed with ROP in Armenia every year.

The AECP, in cooperation with USAID and the Ministry of Health, launched the three-year program, “Center of Excellence for the Prevention of Childhood Blindness,” in 2012. The vision of the program is to make specialized eye care accessible to all children in Armenia and surrounding countries and eliminate childhood blindness caused by ROP.  It is the logical continuation of the “National Screening and Treatment Program on Retinopathy of Prematurity in Armenia” that the AECP has implemented since 2010. Over 2,000 infants have been screened and 70 kids have received free-of-charge quality laser procedures.