The real-life werewolf: 13-year-old boy suffers from a rare condition that has caused his face to be covered in hair 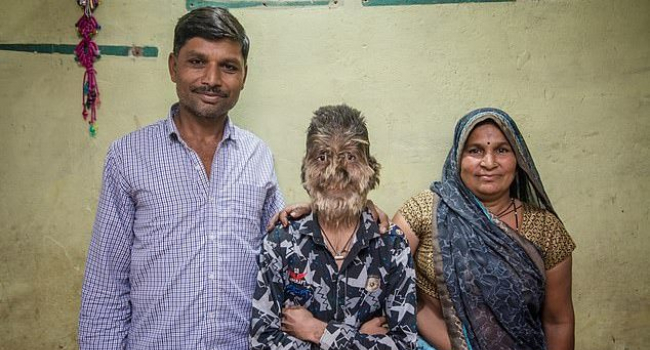 
A schoolboy from India suffers from a rare condition known as 'werewolf syndrome' which has left his entire face blanketed in hair.

Lalit Patidar, aged 13 from Ratlam in the central Indian state of Madhya Pradesh, was born with hypertrichosis.

The condition causes abnormal amounts of hair growth on a person's face, arms and other parts of their body.

Despite his condition, Lalit says he lives a happy life and dreams of one day supporting his parents by becoming a policeman.

There are various types of hypertrichosis, with the congenital (present from birth) form of it the rarest.

It is not known how many people suffer from this type of the bizarre disorder but estimates online suggest only around 50 people have ever been diagnosed.

Short, fine hairs are generally associated with the condition and can grow to be up to 5cm long.

Children affected by genetic hypertrichosis are believed to inherit it, although it may come from a parent who doesn't have the condition themselves.

Other more common forms of the disorder may develop later on in a person's life.