Man, 26, who tried to kill himself receives face transplant in 25-hour surgery 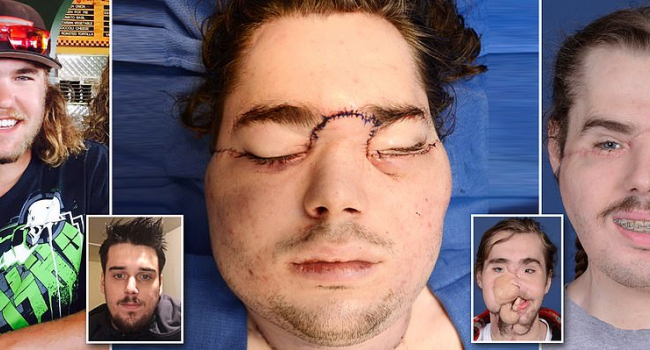 A 26-year-old man has undergone a face transplant two years after narrowly surviving an attempted suicide against the odds, a new report reveals.

Cameron Underwood, who battled depression for years, was 24 when he tried to take his own life with a shotgun in June 2016 after drinking all day.

The welder from Yuba City in Northern California was left with barely anything except for his forehead, eyes and tongue, and his parents were told he wouldn't make it.

Today, two years on, Cam has shared his astonishing progress in an interview and photos with People magazine and ABC News, thanking doctors for giving him a second chance at life.

He also expresses his gratitude to the family of his donor, 23-year-old Will Fisher, described by People as 'a budding New York City writer and filmmaker'. He became a donor after his 'sudden' death following a battle with mental illness on January 5, 2018.

Cam flew directly to New York from California and that night he underwent the 25-hour surgery that changed his life.

'I remember just a sigh of relief that I had a face again, I had a mouth and teeth again, I had a nose again—just such amazement and joy,' Cam told People.

'I couldn't be more thankful for all the hard work and the sacrifices that were made for me.'

He added: 'The biggest difference is just being able to go out without a mask and without people staring at me.'