'My genes turn into tumors': 28-year-old woman has beaten four cancers caused by her rare DNA 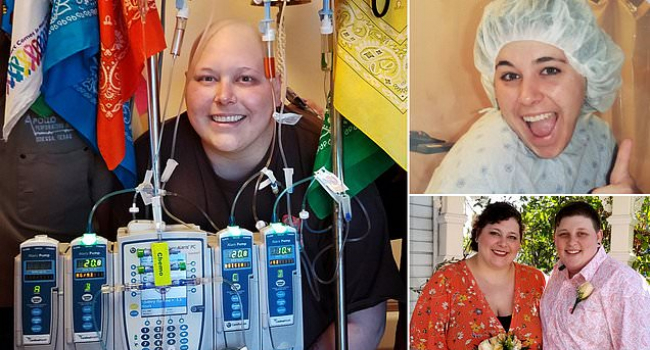 At 17, Lauren Erdmann Marler knew she had cancer.

Growing up in Midland, Texas, Lauren had never been to an oncologist, never had genetic testing, but she knew, 'in her bones.'

For the past two years of her young life Lauren had been bleeding when she went to the bathroom. The blood in the toilet was scary but, at 15, she was too embarrassed to mention it to her parents, or anyone.

Finally, the then-17-year-old wrote a letter to her mother, Lori Erdmann.

When she read it, Lori assured her daughter that she wasn't dying, that it wasn't cancer.

And if Lori had had just about any other daughter, she would have been right.

But Lauren did have cancer - the first of four she would battle over the coming decade.

Due to a rare twist of genetic fate, Lauren has fought - and beaten - colon cancer (twice), uterine cancer and lymphoma, all before the age of 28.

When the blood started appearing in Lauren's stool, she didn't yet know how different her genes made her from any other teenager, and her response to the sight was what any girl her age’s would have been.

'I was so young, and embarrassed, I didn't even know how to process it. I was so freaked out by the situation, but, I thought, "this is gross." I was fifteen,' she says.

But once intense stomach pains began to accompany the bleeding, Lauren did her own research, Googling her symptoms and 'self-diagnosed it.'

'When I saw colon cancer, I thought, oh my gosh, I'm probably dying.'

The odds that Lauren was right were miniscule. Colon cancer only strikes about three out of every 15 million children. To put that in perspective, a little less than four million babies are born in the US each year.