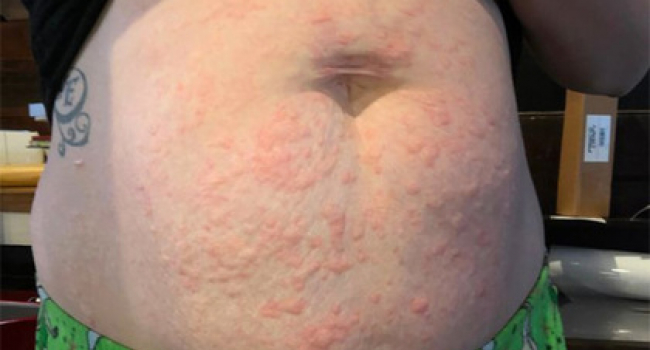 A mum-of-three who is allergic to the cold says her illness which causes her body to erupt in hives is potentially fatal.

Alysha McEntire has cold induced urticaria, a reaction causing histamine and other chemicals to be released into the bloodstream.

Her spots, which range from the size of a mosquito bite to a US quarter (UK two pence piece) and larger, occur after interaction with cold stimulus.

Anything from being outside to sitting on a cold floor and even rain can cause a reaction for Alysha - and it could be deadly if she goes into anaphylactic shock.

But the 26-year-old from Cleveland, Oklahoma, says some people don't believe her allergy is real, often considering it a 'joke' and not appreciating its seriousness.

Alysha initially believed her itchy blotches were caused by taking black elderberry tablets, but after quitting them her symptoms only intensified.

The mum now wraps up in numerous layers to avoid any skin being exposed and tries to avoid being outside in the cold whenever possible.

Alysha, a certified nursing aid, said: "I first noticed my arms were itchy, then by morning they were full of hives.

"I thought it was just dry skin on my arm but as the night progressed, they looked like little mosquito bites.

"By the morning my entire body was covered in hives, my body was super sensitive at the time.

"If I walked outside and then back in my face would be covered - even my lips - and if I sat on a cold floor, hives would appear on my legs.

"I have noticed if I get into my car when it's not warmed-up my ankles will get hives or if I have holes in my jeans they will appear there too."

She continued: "It can take five to ten minutes for a reaction to happen, my allergist advised that I avoid the cold as any allergy can lead to anaphylactic shock.

"People don't know it's a thing or a possibility, they think it's hilarious as they have never heard of it.

"I mostly get reactions of people being shocked to know that being allergic to the cold is a real thing. Most people think I'm joking,

"It can be frustrating when people make jokes because they just don't get it.

"During winter I try to stay inside as much as possible unless I have to go to the store or to work.

"It did especially suck when we had snow as I couldn't play outside with my children, I tried it for a couple of seconds but otherwise went back inside and avoided it."

Alysha went through several beliefs relating to the cause of the symptoms - believing it was dry skin to bug bites and food allergies.