5 X-Ray Photos You Have To See To Believe 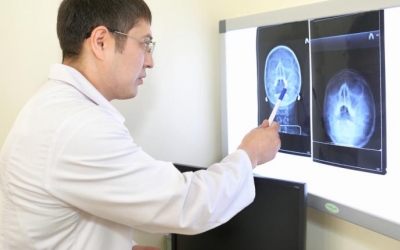 Some injuries are so severe that a person has no choice but to wonder how they are still alive — like a man who survives his literal run-in with a chainsaw between the neck and shoulder or a teenager who has his brain impaled by a fishing spear and lives to tell about it, Medical Daily reports.  It would be hard to believe a person could survive such horrific injuries if it weren’t for photographic evidence via X-ray. Here are five astonishing X-ray photos that you have to see to believe:

1. Survives Chainsaw Blade To The Neck And Shoulder 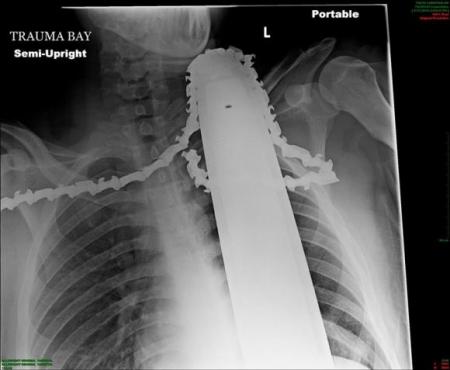 It was just another day at work for Pennsylvania tree trimmer James Valentine. That was until a malfunctioning chainsaw caused the blade to “kick back” and puncture his body between the neck and shoulder. Miraculously, Valentine was able to climb down from the tree he was working on while maintaining consciousness. When he reached his co-workers they made the life-saving decision to remove the blade from the chainsaw’s motor, but the keep the blade and chain right where it was. According to director of trauma at Allegheny General Hospital, Dr. Christine Toevs, the chainsaw was a centimeter away from the man’s carotid artery. 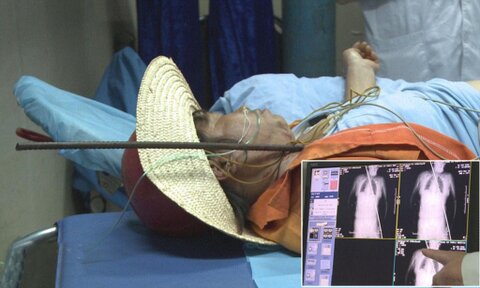 Surviving a fall from 20-feet is pretty incredible in and of itself, but having a seven-foot rod pierce through a person’s neck, thigh, stomach, chest, and exit through their neck is nothing short of amazing. It took five hours’ worth of surgery to remove the piece of steel that penetrated the length of Chinese construction worker Wu Xingxian’s entire body.  Doctors who performed the operation were doubtful Xingxian would live to tell about her potentially fatal injuries after suffering major internal damage and the rod inches away from her heart. Fortunately, the so-called “human kebab” is expected to make a full recovery so long as she avoids any infections.

3. Man’s Heart Rotates In His Body 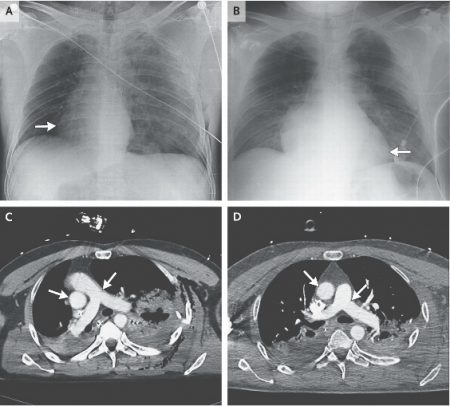 Following a motorcycle accident in Italy that left a 48-year-old man recovering from traumatic injuries, an X-ray and CT-scan would reveal an unusual medical diagnosis. Dr. Andrea Colli and Dr. Enrico Petranzan, both from the University of Padua in Italy, co-authored a report in the New England Journal of Medicine that included an X-ray image of the man’s rotated heart 90 degrees to the right within his body. Doctor’s treating the man said a punctured a lung that caused air to release out of the lungs and into the space around his chest most likely resulted in the man’s heart rotating in his chest. They were able to turn the man’s heart back to its original position by draining the air 24 hours later. 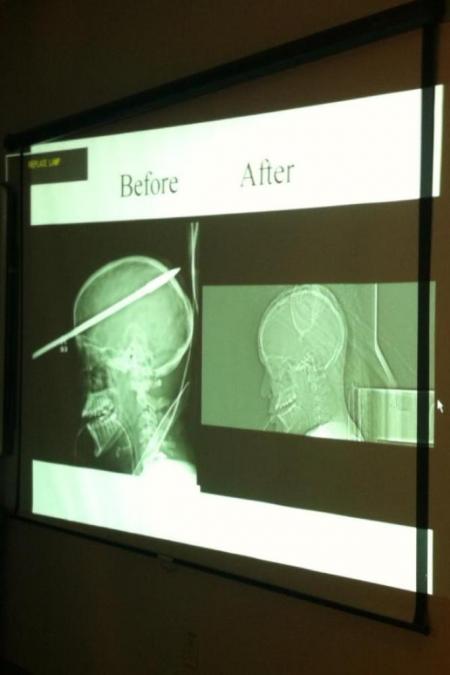 A ghastly injury 16-year-old Yassar Lopez suffered while fishing was so gruesome both he and his friend who witnessed the accident lost consciousness. While fishing in a Miami lake, a spear gun Lopez’s friend was holding unintentionally fired, sending the 3-foot spear through the teen’s skull. Upon arriving to Jackson Memorial Hospital, doctors were forced to chemically paralyze Lopez to prevent the spear from causing a second injury. In order to remove the spear that was a mere inch above his right eye, doctors called in Miami-Dade Fire and Rescue Team’s tactile unit, who used a rebar cutter and vise-grips to “stabilize the spear” while they shortened it just so he could fit into a CT scan. Due to its improbable positioning, the spear missed the vital structures and major vessels of the teen’s brain. It was successfully removed after three hours of surgery. 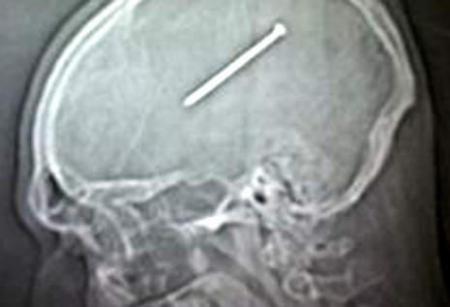 It’s amazing that Dante Autullo survived 3.5-inch nail that was fired into his brain, but it’s even more incredible that he walked around for over a day without even realizing it was there. The accident occurred while Autullo was working with a nail gun on a ladder in his garage. After the gun misfired, the man thought he had dodged the stray shot when it was actually lodged deep into his brain. While he felt fine the next day, a fit of nausea and headaches two days after the incident caused him to leave work and take a nap. At his wife’s urging, Autullo made a trip to the hospital where he was just as shocked as his doctors when an X-ray revealed a nail that was placed a few millimeters away from the area of his brain that controls motor function. Autullo was on the road to recovery following four hours of surgery, a metal plate, and a patch of mesh.