Psychopaths may more easily forfeit one person for greater good 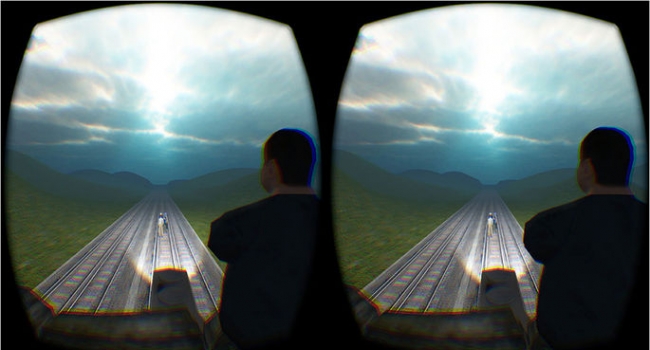 People are prepared to sacrifice one person to save a larger group of people – and the force with which they carry out these actions could be predicted by psychopathic traits according to a new study out today.

The research conducted by an interdisciplinary team including a Philosophy and Psychology academic from the University of Reading compared what people 'said' they would do with what they actually 'did'. It did this by comparing a questionnaire with actions in immersive moral dilemmas created using virtual-haptic technologies (i.e. using a robotic device which measures force, resistance, and speed, whilst simulating the action of harming a human).

In several dilemmas, participants had to decide whether to sacrifice a person by performing a harmful action against them, in order to save a larger group of people.

Dr Kathryn Francis, a Postdoctoral Research Fellow in Philosophy and Psychology at the University of Reading, said:

"This research highlights our proneness to moral inconsistency; what we say and what we do can be very different. For the first time, we demonstrate how personality traits can influence the physical power of our moral actions.

"Importantly, the multidisciplinary approaches that we have used here, combining virtual reality, robotics, and interactive sculpture, places further emphasis on the need to unite the sciences and the arts when investigating complex phenomena such as morality."

Psychopathy is generally characterised by antisocial behaviour and impaired empathy. As such, it is thought that individuals with strong psychopathic traits find it less emotionally challenging to sanction utilitarian actions.

In the present research, this resilience to performing actively harmful acts appears to enable these individuals to act for the 'greater good' (i.e. to save the many). This result therefore indicates that, in certain circumstances, psychopathic traits could be considered beneficial, since they can lead to a more vigorous response.

This study is a result of an interdisciplinary collaboration between Dr Kathryn Francis while completing her PhD at the University of Plymouth and academics across several disciplines there.

Dr Sylvia Terbeck, Lecturer in Social Psychology and study co-author, added: "This study opens up the possibility to assess psychopathy using novel virtual reality technology – which is vital to better understand how and why people with these behavioural traits act in certain ways."

Dr Ian Howard, Associate Professor in the Centre for Robotics and Neural Systems, said: "This work shows how techniques developed to study human movement can play a value role in psychological assessment and thereby lead to new insights into human social behaviour."

The full study, which was supported by CogNovo, is titled "Simulating Moral Actions: An Investigation of Personal Force in Virtual Moral Dilemmas" and is available to view in the journal, Scientific Reports.