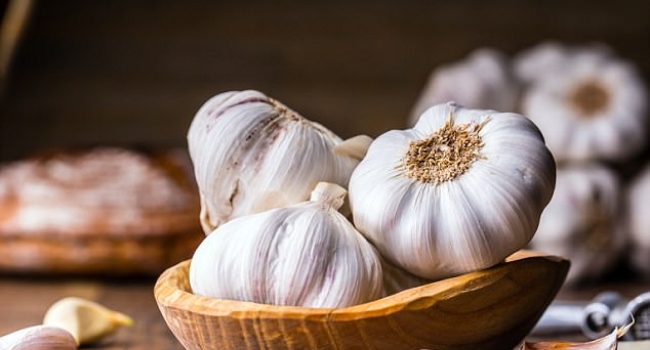 A compound in the pungent kitchen-staple, known as ajoene, breaks down resistant bacteria, allowing antibiotics to work again, a study found.

As The Daily Mail reports, it does this by disrupting a gene that microbes require to stick to human tissue, without which they cannot reproduce, the Danish research adds.

Around 30 per cent of people carry the the Staphylococcus aureus bacteria, which is responsible for MRSA and resistant to widely-used antibiotics, on their skin or in their noses, which can invade the bloodstream and release poisonous toxins that kill up to one-fifth of patients.

Methicillin-resistant Staphylococcus aureus (MRSA), which kills up to one-fifth of infected individuals, is affecting people throughout Britain by going undetected in communities, a study found.

Although the infection is typically associated with hospitals, many sufferers are unaware they carry MRSA, which is symptomless unless it enters the bloodstream.

This allows them to spread the life-threatening bacteria through skin-to-skin contact when out and about, the research adds.

Despite patients being routinely screened for the bacteria upon hospital admission, the test is fairly inaccurate, which further encourages the infection to spread.

Dr Jonathan Pearce, head of infections and immunity at the Medical Research Council, who was not involved in the study, said: 'This study sheds light on MRSA transmission within and between hospitals and the community, which could help strengthen infection prevention and control measures.'

Enables the body to fight infection

Researchers from the University of Copenhagen found ajoene suppresses a particular gene that leads to the destruction of bacterial 'biofilm'; which is required to stick to human tissue.

Although this does not kill bacteria, it prevents them from communicating with other microbes, which they need to do in order for their numbers to grow.

This enables antibiotics and the body's immune system to fight infections more effectively.

'Treatment of patients who have poor prospects'

Study author Professor Tim Holm Jakobsen said: 'We really believe this method can lead to [the] treatment of patients who otherwise have poor prospects.

'Chronic infections like cystic fibrosis can be very robust. But now we, together with a private company, have enough knowledge to further develop the garlic drug and test it on patients.'

'The two types of bacteria we have studied are very important. They are called Staphylococcus aureus and Pseudomonas aeruginosa.

'The garlic compound is able to fight both at once and therefore may prove an effective drug when used together with antibiotics.'

The findings were published in the journal Nature Scientific Reports.

'Garlic drug' to be tested

The study builds on previous work that, since 2005, demonstrates garlic's ability to inhibit bacteria, with ajoene being found to be responsible in 2012.

In 2012 the researchers took out a patent on the use of ajoene to fight bacterial infections, with the pharma firm Neem Biotech later buying the licence to use the patent.

Their drug, NX-AS-401, which aims to treat patients with cystic fibrosis, is set to be trialed in clinical studies within the next two years.