A new noninvasive device for intracranial pressure (ICP) monitoring has been developed by Israeli company HeadSense Medical Ltd. The device, which is called the HS-1000, is now being tested in many clinics around the world, including the US, Japan, several European countries, and several clinics in Armenia. The device already has a CE certificate, and its developers have now applied for a marketing authorization from FDA. 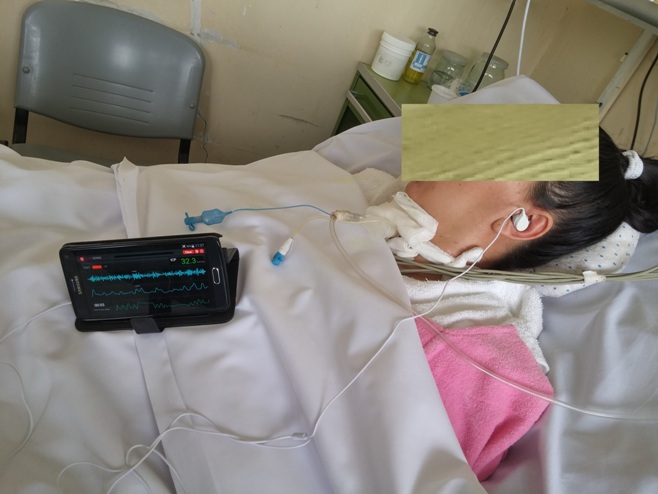 HeadSense Medical develops inexpensive, easy-to-use devices for patient monitoring and diagnosis of cerebral dysfunction. The HS-1000 is the first product of the company.

The author and the developer of the device, as well as the co-founder and scientific director of the company is Surik Papyan, who is originally from Armenia and currently resides in Israel. He is on a working visit in Yerevan with Alexandra Levinsky, who is responsible for algorithmic development in the company. Here in Yerevan scientists carry out research and develop electronic and software components for the company. 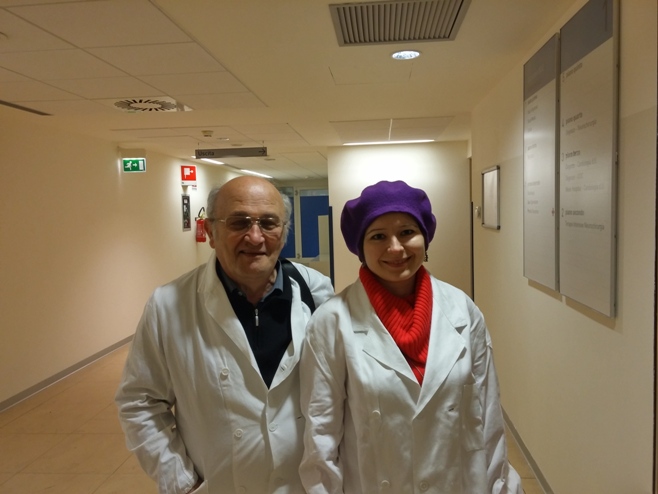 What are the advantages of the HS-1000 over the existing invasive and noninvasive ICP monitoring methods?

Figuratively speaking, the HS-1000 "listens" to our brains.

"The brain, just like the rest of the body, makes a noise when it works. This noise is at “low frequencies,” so we do not hear it. The sound of our circulatory system can be compared with the sounds of running water. The blood makes a different noise when it passes through too narrow or too wide vessels," Surik Papyan explained.

We can “hear” these “sounds” only when we put a microphone in the ear canal, because of the fact that the outer ear canal, being hermetically sealed, becomes a unique resonator, something like an "organ pipe," according to Alexander Khachunts, who is the head of the Laboratory of Psychophysiology of the National Academy of Sciences of Armenia and also took part in this project.

Just as a skilled mechanic can detect faults in a vehicle by listening to the sound of the engine, the HS-1000 can identify problems in the brain by listening to its sounds. The mathematical algorithms implemented in the device allow to dynamically measure and display the value of intracranial pressure. 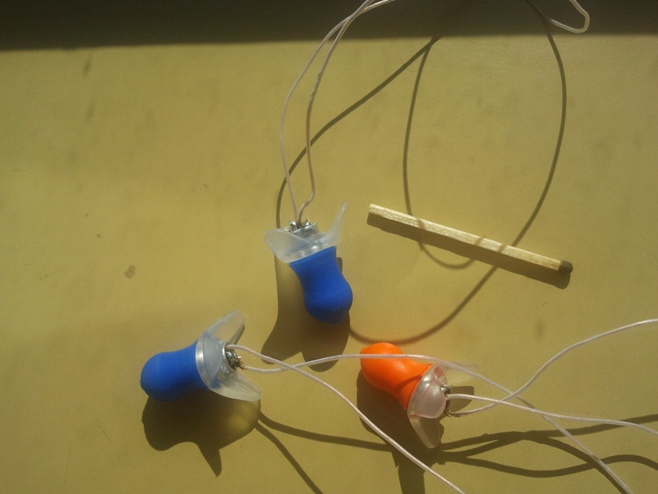 The HS-1000 is equipped with a microphone, which is placed in the ear and records the mixed acoustic signal, which is formed by hemodynamic and liquorodynamic processes in the brain. It also records the air flow in the upper airways. 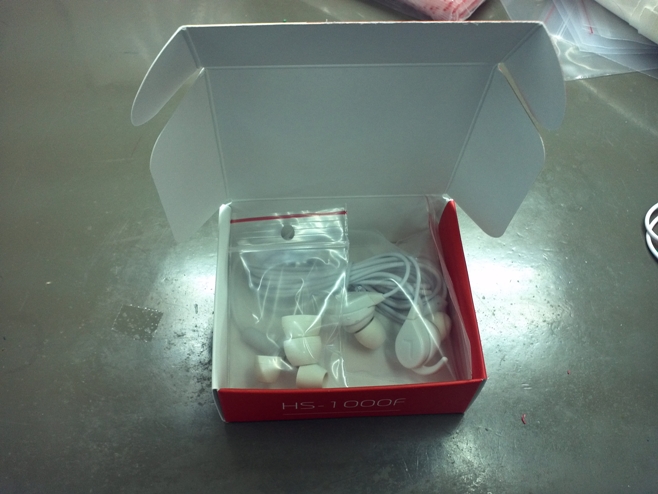 The acoustic signal is transmitted from the microphone to a tablet, PC or a mobile device with a special application installed. This application calculates the level of intracranial pressure and the physiological parameters needed to assess the patient's condition. Then the results are displayed. 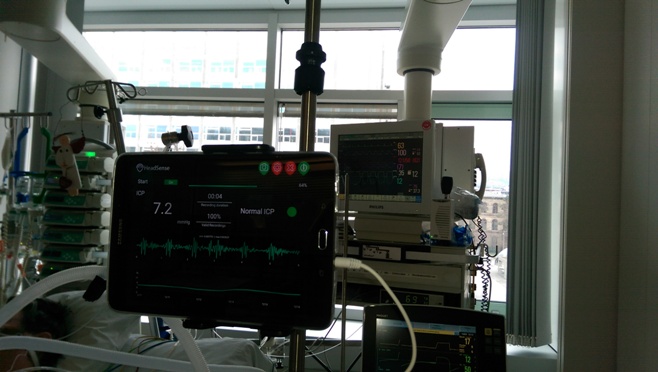 Why is it so important to keep intracranial pressure under control? When the CSF pressure goes up, the cerebral vessels compress, and the brain receives less blood. That is why, according to Alexander Hachunts, ICP is such an important parameter in monitoring injuries and diseases of the brain. If the situation becomes critical, the patient can be lost in a matter of minutes.

What advantages does the HS-1000 have over other noninvasive methods like CT and MRI? Well, its main advantages are its portability, mobility, ease of use and low cost. According to Alexandra Levinsky, CT and MRI are expensive methods that require much time to diagnose the patient's condition. Besides, they do not provide a numerical assessment of ICP and do not allow to monitor the dynamic changes in ICP.

"With our device you can measure ICP in a few seconds and easily monitor the patient's condition,” she said.

In extreme cases, invasive methods of ICP control are used, for example, lumbar puncture, which is a fairly common but insecure and painful method. Another invasive method includes inserting a pressure sensor in the intracranial space. This method requires a craniotomy (drilling) of the skull and, according to Alexandra Levinsky, it can only be used if the patient is being operated on or already has a traumatic brain injury.

"It is unacceptable to drill an intact skull just to measure intracranial pressure," she said.

Of course, craniotomy can also have a decompressing effect thanks to which the pressure is reduced, but this can lead to many problems like bleeding and infections, Alexander Khachunts added. Besides, clinical conditions and a highly skilled neurosurgeon are required for trepanation, and still the method does not allow long-term monitoring. According to the scientist, in this respect, it is impossible to overestimate the importance of the noninvasive devices for ICP measurement, one of which is the HS-1000. 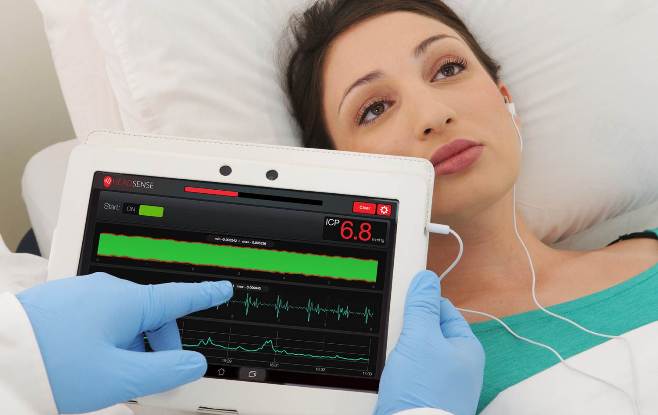 The developers are currently trying to improve the device so that it can diagnose certain conditions like vasospasm or aneurysm of the brain blood vessels in addition to measuring the intracranial pressure. The device can also be used to diagnose ischemic or hemorrhagic stroke, which is important for choosing the right treatment. This feature of the device can be especially useful in emergency department, when it’s necessary to quickly diagnose the type of stroke to decide how to treat the patient.

Other possible applications of the HS-1000 include determining the degree of the concussion and estimate the severity of head injuries. The device can also be used in screening programs.

According to Alexander Khachunts, the HS-1000 can have a wide range of applications, but even if it only helps to determine whether or not it is necessary to see a doctor, it is still very valuable.

"This device is very simple and does not require the involvement of qualified medical staff, so you can write a manual that can help people to use it at home. This creates new prospects: the patient can send the data from the device to his GP, who will be able to remotely help the patient without having to visit him," he said.

Finally, Surik Papyan told a funny story about how he was almost taken for a spy in the Yerevan airport. When leaving Yerevan, he had a few sets of cards with microphones for the HS-1000 in his bag. The microphones attracted the interest of customs officers, and they asked what those were for. Papyan said that he used the microphones to listen to the brain. “Is it even possible to listen to the brain?” one of the officers asked. Then the senior officer (a man in an expensive suit) came. Papyan thought he would not be able to fly anywhere on that day, yet the senior officer turned out to be positive about the invention and just asked to have an accompanying document for the microphones next time. 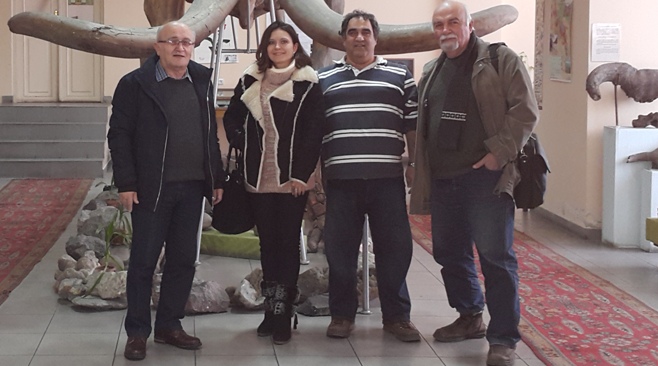