A cancer survivor whose face was ravaged by a tumour, leaving him with a large hole where his eye, nose and cheekbone had been, has become the first person to receive a 3D printed face prosthesis made with a smart phone.

Married former salesman Carlito Conceiçao has lived with the hole and an uncomfortable prosthetic that kept falling off since 2008 - but now a ground-breaking procedure used a free app on a smartphone to built and print a 3D image of the missing part of his face.

Researchers now hope to train as many people as possible to make the affordable and practical technology accessible in remote areas of the world where people have minimal health care services.

Mr Conceiçao, 54, was diagnosed with upper maxillary carcinoma, an aggressive form of cancer in the upper palette of his mouth.

The cancer spread rapidly, destroying facial tissue on the right side of his face and half of the roof of his mouth, as well as damaging his throat.

Life-saving surgery halted the spread before it reached his brain, but when the tumour was removed, it claimed his right eye socket and part of his nose, sending him into depression.

Since the surgery eight years ago, Mr Conceiçao - a father-of-two who used to be a salesman in Sao Paulo - has used an uncomfortable prosthetic that kept falling off.

But in February, he was offered an innovative procedure which uses a smart phone for photogrammetry to build and print a 3D image of the missing part of his face.

The hand-finished silicon prosthesis, which is attached by magnets to three titanium screws under his eyebrow can easily be removed to be washed, has transformed his life by restoring his self-esteem.

Mr Conceiçao said: 'My first prosthesis was fragile, poor quality and kept falling off because it was held on by glue. I felt totally disfigured and I looked terrible.

'I lost all my confidence and fell into a deep depression.

'I couldn't work and became a recluse because people would stare and point whenever I went out. I used sunglasses to cover up the area most of the time.

'I was so impressed by the result of the new one, I cried when they fitted it.'

Dr Rodrigo Salazar, a dentist and specialist in oral rehabilitation, from Paulista University (UNIP) in Sao Paulo, has been leading the project for two years.

He said: 'Brazil doesn't have the resources to equip all of its clinical centres with high-end technology.

'So, we've developed an alternative and simplified low-cost procedure that captures patients' facial anatomy and generates physical working models, giving us the equivalent results to prostheses produced on state-of-the-art equipment that costs hundreds of thousands of pounds.'

He took 15 images of the trauma area in a planned sequence at three different heights.

He said: 'The rational for using a smartphone is that all modern mobile devices have an integrated accelerometer and a gyroscope sensor, which are automatically run by the application to guide the operator's 3D position during the photo capture sequence.'

The photos were uploaded and converted into a virtual model of Mr Conceiçao's face.

Dr Salazar said: 'We mirrored the healthy side of Carlito's face then digitally sculpted it to fit the trauma side.'

The prototype of the patient's face was then created on a low-cost printer, which created a silicone prosthesis.

This was hand-finished by volunteer clinical artists who added skin colours, texture and realistic wrinkles to give a natural looking fit.

Dr Luciano Dib, a maxillofacial surgeon who is involved in the project, performed the two-hour integration operation.

He said: 'This is a well-established procedure for anchoring cranio-facial prostheses.

'It means wearers can confidently go to the beach, take a shower, go to the gym and run without fear of the prosthesis falling off. And they can take it off at night to clean it.'

It is unclear how long the prosthetic will last before it needs to be replaced, but a silicone facial prosthesis typically lasts between one and three years depending on a number of factors, such as work and home environment, sun exposure, skin type and hygiene.

The procedure is being pioneered by a team of physicians in Brazil and the US as a feasible low-cost alternative for clinical centres that do not have access to high-cost technology.

Under the Plus ID project, doctors took less than 20 hours to create the prosthesis for Mr Conceiçao's face.

Rosemary Seelaus, an anaplastologist at the University of Illinois Hospital of Health Sciences System at Chicago who is part of the project, said: 'Our aim with the Plus ID project is to address a multi-dimensional problem that's global.

'Head and neck cancer is a huge public health issue around the world and many people don't have access to rehabilitative care when the disease mutilates the face.'

According to 2014 research by the Union of International Cancer Control, there are more than 550,000 cases of head and neck cancer incidences with around 300,000 deaths every year.

As an anaplastolgist, Dr Seelaus is one of only a few hundred experts in the world who has the skill-set of a clinician, artist and engineer to make external artificial parts from start to finish.

She added: 'Our intention is to train as many people as possible to make this affordable and practical technology accessible throughout South America, Africa and Asia and in remote areas of the world where people have minimal health care services.' 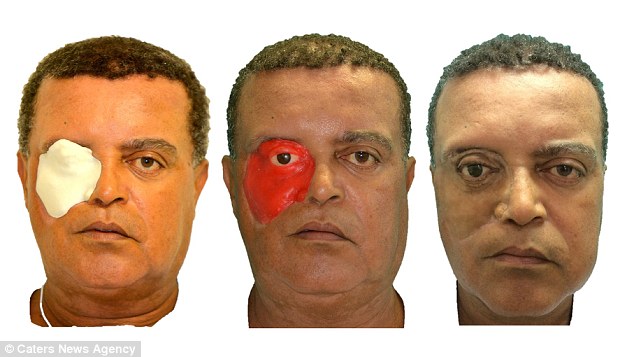 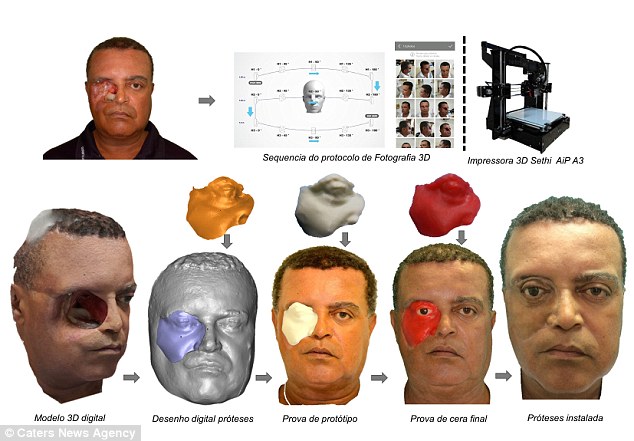 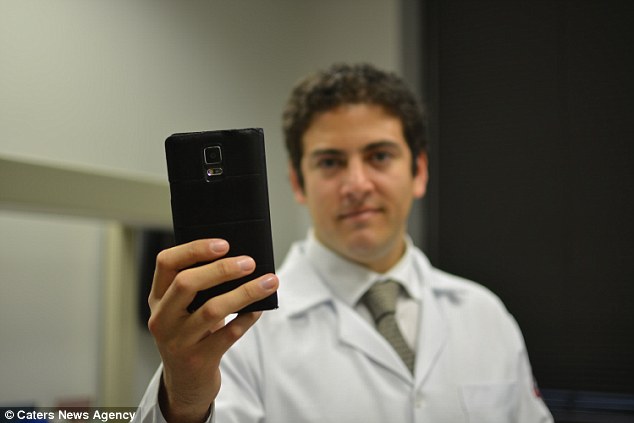