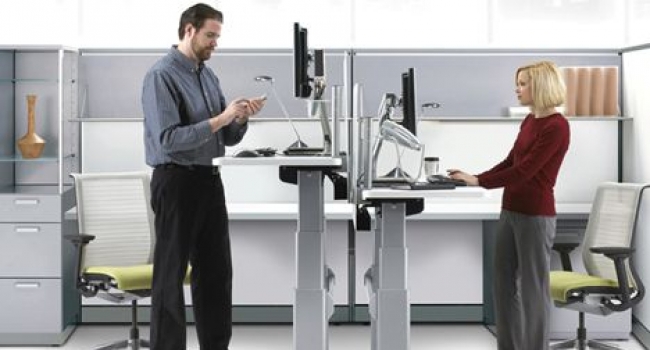 Standing instead of sitting for six hours a day could help people lose weight over the long term, according to a Mayo Clinic study published in the European Journal of Preventive Cardiology.

As MedicalXpress reports, in recent years, sedentary behavior, such as sitting, has been blamed for contributing to the obesity epidemic, cardiovascular disease and diabetes, says Francisco Lopez-Jimenez, M.D., senior author and chair of preventive cardiology at Mayo Clinic. Population-based studies report that, in the U.S., adults sit more than seven hours a day. The range across European countries is 3.2 to 6.8 hours of daily sitting time.

The study examined whether standing burns more calories than sitting in adults in the first systematic review and meta-analysis (combining data from multiple studies) to evaluate the difference. The researchers analyzed 46 studies with 1,184 participants. Participants, on average, were 33 years old; 60 percent were men; and the average weight was 143.3 pounds.

"Overall, our study shows that, when you put all the available scientific evidence together, standing accounts for more calories burned than sitting," says Farzane Saeidifard, M.D., first author and cardiology fellow at Mayo Clinic.

The researchers found that standing burned 0.15 calories (kcals) per minute more than sitting. By substituting standing for sitting for six hours a day, a 143.3-pound adult would expend an extra 54 calories (kcals) in six hours. Assuming no increase in food intake, that would equate to 5.5 pounds in one year and 22 pounds over four years.

"Standing for long periods of time for many adults may seem unmanageable, especially those who have desk jobs, but, for the person who sits for 12 hours a day, cutting sitting time to half would give great benefits," Dr. Lopez-Jimenez says. The authors acknowledge that more research is needed to show if replacing standing with sitting is effective and whether there are long-term health implications of standing for long periods.

In recent years, moderate to vigorous physical activities in daily life have been encouraged in efforts to maintain and lose weight, and reduce the risk of heart disease, he says. But individuals cite barriers, such as time, motivation or access to facilities. Non Exercise Activity Thermogenesis, known as NEAT, a concept developed by James Levine, M.D., Ph.D. and Michael Jensen, M.D.—both Mayo Clinic endocrinologists and obesity researchers—focuses on the daily calories a person burns while doing normal daily activities, not exercising.

"Standing is one of components of NEAT, and the results of our study support this theory," Dr. Lopez-Jimenez says. "The idea is to work into our daily routines some lower-impact activities that can improve our long-term health."