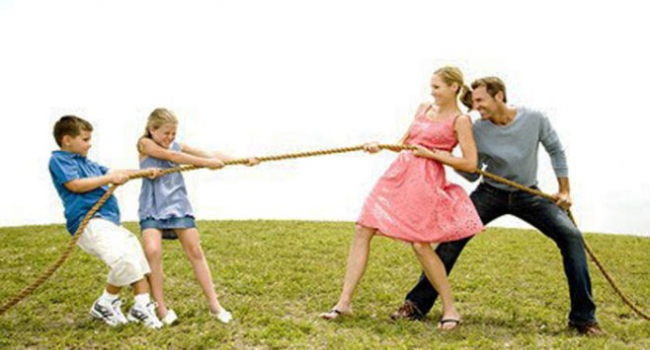 From slammed doors and screams of “I hate you” to bedtime battles, children have over 4,200 arguments with their parents by the age of 18, according to a new survey.

With an average of five battles a week for 16 years of growing up (ages 2-18), the number of disputes adds up quickly and a new study delves into some of the battles parents face with their children growing up.

On average, fights or disputes between parent and child typically last for 14 minutes and parents estimate ‘winning’ just over 60 percent of them.

The most common reasons for disputes are household chores (69 percent), messy bedrooms (64 percent) and not cleaning up shared spaces (63 percent).

Rounding out the top five were fights about homework (63 percent) and bedtime (52 percent).

Conducted by OnePoll on behalf of Sleepopolis, the survey of 2,000 parents with children aged 2-18 examined the battles parents face with their children and how sleep quality plays a role.

Modal TriggerLuckily for all involved, less than 40 percent of the arguments parents have with their children are described as being serious.

In order to win these battles, 66 percent of parents admit to bribing their children, with popular bribes being dessert, extra screen time or staying up a bit later.

Thirty-nine percent of parents say they went through a period of time in which they fought constantly with their child – and parents say 12 is the most argumentative age.
As children age, the types of battles parents have with them change as well.

For parents with children aged 16-18, 69 percent have stayed up late to make sure their children were home before curfew.

And this doesn’t help the arguments parents have with their kids – 43 percent say their lack of sleep contributes to the number and/or severity of the battles they have with their children.

Seventy-three percent worry that their children don’t get enough sleep at night, and half of parents say this too contributes to the number and/or severity of arguments.

Parents report that the majority of arguments (53 percent) occur in the evening or night.

“The survey highlights how the number of arguments increases when people are tired – whether that be the parents or the kids,” said Logan Block, the director of content at Sleepopolis. “When possible, it’s important to go to bed, take a chance to calm down and readdress an issue with fresh eyes in the morning.”

Two-thirds of parents believe their child’s mood would improve if they got more sleep.
To help this issue, 78 percent of parents report having a specific bedtime routine.

For children 2-5, this often includes going to bed at a specific time (79 percent), reading a story (60 percent) and having a toy or stuffed animal to sleep with (50 percent).

And for children 16-18, their bedtime routine often consists of going to bed at a specific time (86 percent) and taking a bath or a shower (72 percent).

“A plethora of factors go into having a good night’s rest, but setting a routine is a great step in the right direction. From trying to go to bed at a similar time every night to putting away phones and other screens, there are simple actions that can be taken to help people improve their sleep,” said Block. “Other factors, such as having a comfortable mattress and the right sleeping conditions are also necessary in ensuring quality rest. Mattresses aren’t a ‘one size fits all,’ product, and it’s important to have the right fit for you.”

Some creative lies parents have told their children include “that the under-the-bed monster only goes after children who don’t go to sleep on time,” “if you sleep you grow taller” or the ever-popular white lie that Santa only visits children who go to sleep (50 percent).

Arguments aside, 91 percent of parents say they feel close to and connected with their children.

To be on their best behavior because Santa is watching 58 percent
Santa only visits children who go to sleep 50 percent
If they don’t go to sleep, the Tooth Fairy won’t come 46 percent
If you’re naughty, Santa will bring you coal 45 percent
Secretly mixing in healthy food to meals 37 percent
“Losing” an annoying toy/saying it’s broken 34 percent
Spinach makes you strong 32 percent
Telling lies makes their nose grow (like Pinocchio) 29 percent
Chewing gum stays in you for seven years if swallowed 25 percent
Cracking your knuckles gives you arthritis 24 percent