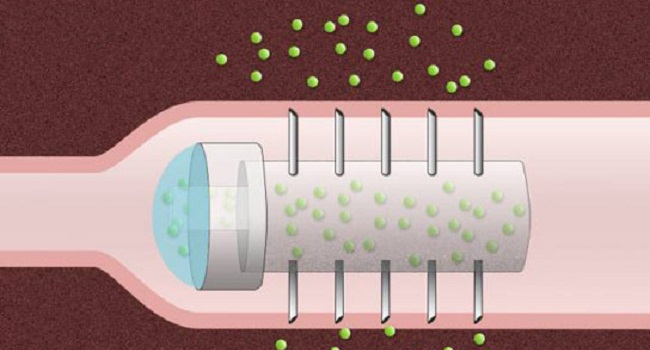 One of the reasons it is so difficult to deliver large protein drugs orally is that these drugs cannot pass through the mucus barrier lining the digestive tract. This means that insulin and most other "biological drugs"-drugs composed of proteins or nucleic acids-must be administered by injection.

A new drug capsule developed at the Massachusetts Institute of Technology may one day be able to replace these injections. The capsule has a robotic cap that rotates and tunnels through the mucosal barrier when it reaches the small intestine, allowing the drugs carried by the capsule to pass into the cells lining the intestine.

In a study published in the journal Science Robotics, the scientists demonstrated that they could use this approach to deliver insulin as well as vancomycin, an antibiotic peptide that currently has to be administered by injection.

For several years, scientists have been developing strategies to deliver protein drugs, such as insulin, orally. Because protein drugs usually break down in the acidic environment of the digestive tract, they also have difficulty penetrating the mucus barrier lining the tract.

To overcome these obstacles, they came up with the idea of a protective capsule that includes a mechanism that can tunnel through the mucus.

The RoboCap capsule, the size of a multivitamin, contains the medicine in a small reservoir at one end and tunneling elements in the main body and on the surface. The capsule is coated with gelatin, which can be tuned to dissolve at a certain pH.

When the coating dissolves, the change in pH triggers a tiny motor inside the RoboCap capsule that begins to spin. This movement helps the capsule penetrate the mucus and expel it. The capsule is also covered with small spikes that scrub the mucus away, similar to the action of a toothbrush.

The rotating motion also helps break up the compartment that holds the medicine, which gradually enters the digestive tract.