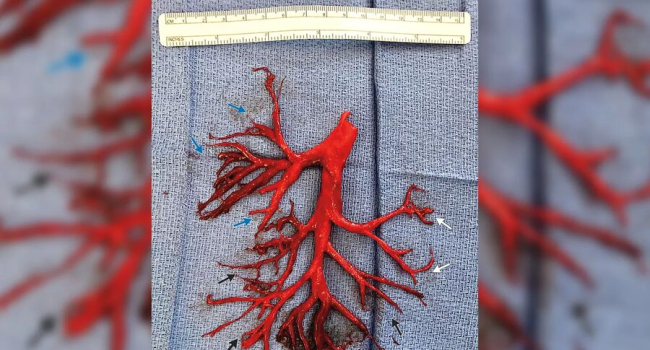 A 36-year-old man in California coughed up a large blood clot shaped like a bronchial tree. The case was reported by physicians at the University of California, San Francisco. The report was published in The New England Journal of Medicine.

The man was hospitalized in serious condition due to worsening heart failure. His condition was so severe that doctors hooked the patient up to a ventricular assist device, which helps the heart pump blood. This device can also increase the risk of blood clots, so he was prescribed blood thinners.

However, these medications increase the risk of bleeding and coughing up blood. According to the report, the patient had several episodes of coughing during which he was producing small amounts of blood. But then, during a severe coughing fit, the patient coughed up a "cast" of caked blood that was shaped like bronchi - branching airways. Although the man had no further episodes of coughing up blood, he sadly died a week later from complications of heart failure.

Sometimes patients cough up bronchial "casts" consisting of lymph or mucus. But blood is less robust than these substances, so the likelihood of coughing up a blood "cast" is virtually nil. The authors reported that the patient had an infection that raised levels of the protein fibrinogen, which contributes to blood clots. They speculate that the higher level of fibrinogen helped the man's large blood clot remain intact when he coughed it up.