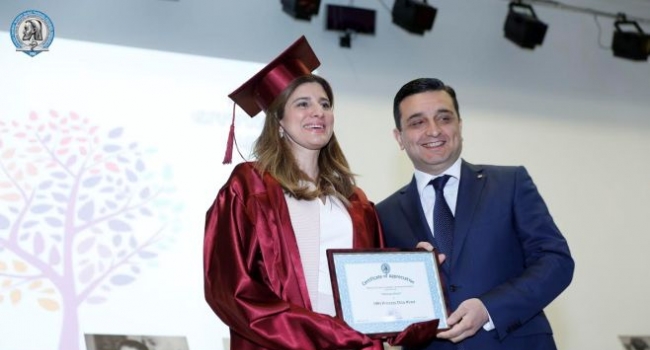 The director general of King Hussein Cancer Foundation (KHCF), the chairwoman of the Union of International Cancer Control, the Princess of Jordan, Dina Mired was awarded an honorary doctor title by the Yerevan State Medical University (YSMU).

During the April 28 Cancer Survivor Congress, the princess delivered an acceptance speech urging people to fight cancer not only by means of building new hospitals and  buying new equipment, but also by launching a large-scale campaign against smoking.

She also noted the importance of Armenian community in the life of Jordan, adding that visiting one of the ancient monasteries of Armenia, she had a desire just to travel around Armenia, leaving all affairs.

Mired said she had sent photos home, and her relatives could not believe that Armenia is so beautiful.

The princess noted that she is mother of a child who overcame cancer, and it is “the most important title” for her.

“We visited different centers in Armenia, and I am very glad to see modern equipment and many good doctors, which is the most important. But I want to use this opportunity and say: start an anti-smoking campaign,” she said.

According to the princess, tobacco companies have targeted countries such as Jordan and Armenia, because their business has almost stopped in developed countries, and, of course, they need to find new smokers.

“Middle East, Africa, the Caucasus and Central Asia. And they spend a lot of money to make the youth become addicted to tobacco. They know that if a young man does not smoke cigarette before the age of 24, he is lost for them. So imagine, they have billions of dollars of budget, and they spend it on right marketing. Lung cancer has been the leading cause of cancer death for many years in Armenia. Do not forget, cigarettes also affect other organs. Health care, warning campaigns, preventive measures are needed to fight cancer. If not to use these, fight against cancer will not be successful. And I know that Armenians want their nation be healthy. There's a will there's a way. Armenians have a fine saying: tomorrow it will be better, than today. And if you begin to follow this path, tomorrow will be better than today, “she said.

YSMU Rector Armen Muradyan, in turn, told the princess that the percentage of smokers among men made 55% in Armenia a few years ago, and it seemed to be difficult to solve the problem, but thanks to a number of measures, in particular, introduction of an excise tax on tobacco products, this year this figure dropped to 52%.The rector noted that fight against cancer begins not only from hospitals, but also from family and from school.