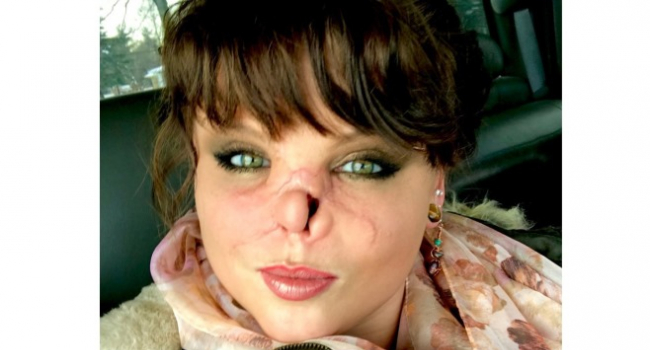 Gabrielle Myers, 29, from Indiana going to friends for a party and was attacked by a pit bull, The Sun reported.

According to Gabrielle, she previously communicated with this dog, but on that unfortunate day - June 11, 2017 - the dog attacked her. The injuries were so serious that Gabrielle was transported to the hospital with the help of air ambulance.

“In the end, they restrained me and I was put in a drug induced coma after the surgery - to calm me and allow my body to start healing. Two days later, I woke to find my sister Rachel, 35, standing over me.

It was such a relief to see her and realise I had survived the dog attack.

They said they had repaired my face as best they could. I was just devastated and it took me a while to understand the enormity of what had happened to me.

For days, my head was covered in bandages and I had to eat pureed food - because my gums were mangled and teeth were gone. In short, I was a complete mess. I felt so ugly and disfigured, I still had a big hole in my face,” she said. “I couldn’t see past the hole in my face and I felt so depressed – I didn’t want to see anyone.

It was the worst pain I'd felt in my life. But somehow, I found the will to live.

Gradually, I gained my strength back and got used to cleaning my wounds every day - to prevent dangerous infections.”

“For months I barely left the house. Understandably, I struggled with dogs and my own two noticed a change, but they were still constantly cuddling me.

The last two years have been very hard - people looking at me in the street in horror, seven reconstructive surgeries and the feeling I would never be the same.

One time, in a supermarket, a woman asked me “how can you go out looking like that?”

On another occasion, a man told me I was “disgusting.”

I don't mind when kids stare, but when it's adults they should know better,” Gabrielle added.