Daughter of Angelina, who lost her son in 44-day war, was born 37 weeks pregnant and weighs 2,370 grams (photos) 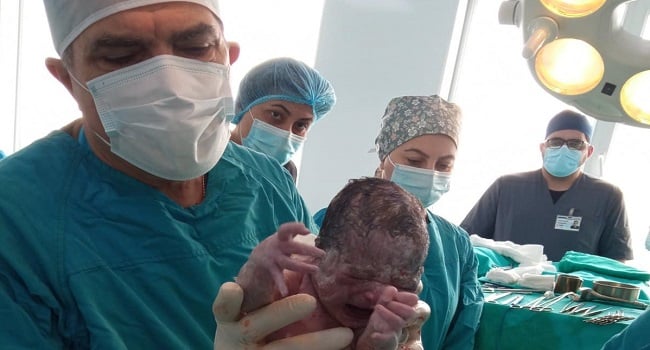 After all she had been through, Angelina, who lost her son in the 44-day war, decided to become a mother again and went to a reproductive specialist. A year later her dream came true: Today her daughter was born.

Reproductologist Anush Abrahamyan told NEWS.am Medicine correspondent that Angelina came to the Fertility Center about a year ago. Angelina was already 48 years old and it is considered to be difficult to conceive and give birth at this age, but that did not stop her or her doctors and within a few months she became pregnant due to modern assisted reproductive technologies.

According to specialists, patients are always carefully examined before in-vitro fertilization (IVF) to detect and treat all problems which could interfere with the efficiency of the procedure as well as with normal pregnancy. The older the patient, the greater the risks and complications, as she may have chronic illnesses and other problems that could escalate and lead to serious complications if she becomes pregnant.

"Before IVF, we always thoroughly examine the patient. We have to do everything to make sure that the pregnancy will not harm the health of the woman herself. Any problems should be identified and treated before the patient becomes pregnant so that there are no complications later," said the specialist.

Angelina got pregnant even faster than specialists could have expected: the first IVF attempt was unsuccessful, but already after the second attempt a pregnancy was registered. According to Anush Abrahamyan, at Angelina's age this is a real miracle.

The pregnancy was monitored at Fertility Center till the 12th week and after that the patient was registered at Erebouni Medical Center where she gave birth by cesarean section.

Angelina's daughter was born 37 weeks pregnant. She weighed 2370 grams and was 46 centimeters tall.

As Anush Abrahamyan mentioned, Angelina is one of five patients who lost their sons in the 44-day war and has become pregnant again as part of the program to overcome infertility. IVF for these patients is paid for through a government contract, and they can participate in the program until they are 53.

Dozens of pregnancies have already been registered under this program, and doctors, just like parents, are eagerly awaiting the births of brothers and sisters of the men who died in the 44-day war.