Bone fractures do not heal the way we thought, study finds 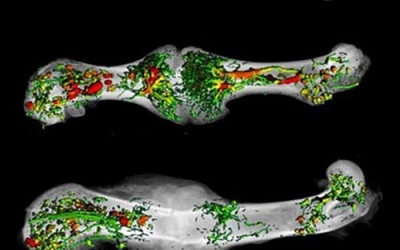 Contrary to current thinking, the presence of fibrin - a protein involved in blood clotting - is not required for bone healing. In fact, it is the breakdown of the protein that is essential for fracture repair.

Bone healing requires removal of fibrin (fibrinolysis) so that blood vessels can grow, reach out and reconnect.

This was the surprising conclusion of a new study led by Vanderbilt University Medical Center in Nashville, TN, that may cause textbooks on bone fracture healing to be rewritten.

The team expects the findings, published in the Journal of Clinical Investigation, will prompt a rethink on how fractures heal and change the way doctors go about promoting fracture repair.

Senior author Jonathan Schoenecker, assistant professor of orthopedic surgery and rehabilitation at Vanderbilt, says many of the current drugs used to promote fracture healing are based on fibrin, and while in some cases this may help, their work shows you do not need it.

"Bone biology does not require fibrin to heal a fracture," he adds.

Fibrin is a protein that is summoned during blood clotting to stop bleeding. When bones break, so do blood vessels, and fibrin helps stop the bleeding.

Fibrin is normally present in an inactive form known as fibrinogen. When bleeding occurs, a clotting enzyme called thrombin converts fibrinogen to fibrin, which forms a tough mesh of fibers that holds platelets in place to help a clot to form.

Prof. Schoenecker says most people do not realize that "bone is the most vascular organ in our bodies. When you have a fracture, you have a huge disruption of that vascularity."

In previous work using imaging techniques, the team showed that reconnection of blood vessels is important for bone fracture healing. Following a bone fracture, blood vessels grow first, and then reach out and reconnect at the ends of the break, leading to new bone formation.

Prof. Schoenecker says this made them think conditions that favor clotting might impair fracture healing. Thus, if fibrin is not removed, it could get in the way.

In the new study, the team showed that if mice do not have the factor that helps to clear the fibrin out of the way, then the blood vessels do not attach very well to the fracture ends and bone healing is impaired.

When they genetically altered the mice so they could not make fibrinogen, it restored normal fracture repair.

Prof. Schoenecker says the findings may explain why smoking, obesity, diabetes and advanced age impair fracture repair - these conditions are all linked with inability to clear fibrin effectively.

Children heal quickly - perhaps this is because their fibrinogen levels are about half the levels in an adult, notes Prof. Schoenecker.